All life on this planet exists because of the sun. The sun warms us, feeds the plants that feed our animal cousins and us. We’re really lucky we came into existence at this particular time in the history of the Universe, because our sun, like all stars, isn’t permanent. To understand the future of the sun, is to understand our future, and that of the solar system. The sun will undergo great tectonic changes, that come in full fruition about 5 to 6 billion years from now. It is strange to think of our sun – everlasting and permanent in the sky for the entire history of our existence – as something that is dying. But that is exactly what is happening – as is the case for everything in our Universe. Even though this future is far, far away, it is fun and educational to think about exactly what will happen to our little solar system when the sun undergoes these changes. It really opens your eyes to how much of the current characteristics of our benevolent little galactic cradle depends on the age at which the Sun is. Before we try to demystify the future of the sun, let’s get into why stars age in the first place. 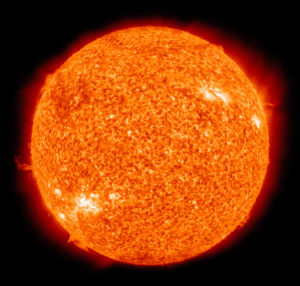 Why are stars dying?

Our sun, and all other yellow giants, are constantly burning, giving out energy. The way they do this is by fusing hydrogen gas into helium – an extremely powerful fusion reaction that we haven’t been able to recreate in controlled conditions. So long as these stars have hydrogen gas, they have fuel to keep making helium, which leads to a slow and steady expansion of the outer layers of the star. Give a star enough time, and it will reach a point where it’s completely out of hydrogen. At this point, the core of that star is incredibly unstable – it is fusing helium, carbon, oxygen – and it doesn’t have enough fuel to support the incredible amount of mass it has accumulated. Just before it’s core collapses, we would call the star a red giant. Once the red giant expels its outer shell into empty space, it is but a remnant of what it used to be, a ghost of the massive star that sat in its place, called a white dwarf. As the initial size of a star varies, so does its eventual future – if the sun was a bigger star, then after it’s red giant phase, it would collapse into a black hole.

Let’s go forward in the future of the sun to understand the changes and pressures this process would put on our solar system. The current age of our sun is 4.66 billion years – let’s fast forward 1.4 billion years to reach a nice, rounded number for the sun’s age.

After the first billion or so years, the sun’s radius would increase by 6%, its luminosity increasing by 13%. It doesn’t seem like a lot – but think about this. The current average surface temperature on Earth is about 15°C. This change in the sun in just a billion years (an eyeblink on astronomical timescales) would be enough to raise the Earth’s average surface temperature to 33°C. At this point, all the polar ice caps will melt. Antarctica will be a much warmer place than it is today.

As we move forward in time, I do want to mention one caveat – we are assuming nothing major goes down in the solar system this entire time. If no major asteroids hit, if no gamma ray burst sterilises the solar system, if nothing happens to the other planets like Neptune, or Jupiter (whose orbits and sizes keep us in line) then, the following is the best estimation of our progress. Obviously, 6 billion years is a long time, and these are very big ifs.

Age of the sun : 7 billion years

The sun’s radius will now have increased by over 11%, its luminosity increasing by 25%. We will observe mounting temperatures on all planets, especially on Mercury, Venus and Earth.

Age of the sun : 8 billion years

At this point in time, the sun will be 17% larger and 39% more luminous. This is going to seriously compound with the runaway greenhouse effect on Venus, which may turn into a hot, molten chunk of rock in space that is visible even from the side hidden from the sun. That will certainly make for an interesting view for the observers alive at the time!

The future of the sun is slowly, but steadily moving toward the red giant phase.

The hydrogen gas is running out. The sun is a whopping 79% larger than it is now, and 244% more luminous. The average surface temperature on Earth would be 101°C – that’s an average temperature above boiling point. The oceans on our planet would slowly start to recede, exposing more and more of our landscapes. To any observers still inhabiting Earth, the sun would look twice as big in the sky as it does now.

At approximately 11.2 billion years old, our beloved sun would expand to a radius a 100 times larger than its current one. At 12 billion years of age, it will expel the outer layers that have engulfed Mercury and Venus, into empty space in what is called a helium flash. This large release of energy may cause damage to the planets around it. The entire process of helium flash and subsequent collapse of a red giant into a white dwarf is dubbed as a planetary nova.

Following the nova, the sun will lose approximately 46% of its mass. This is going to cause some drastic changes in the orbits of the planets around it. To the best of our calculations, the disturbance should not be enough to actually eject any of the planets out of the solar system, but their orbits are going to become highly elliptical. In fact, the orbit we calculate for Earth at that time would take it all the way into the outer solar system before it made its way back. With much lower solar luminosity and its highly elliptical orbit, the average temperature on Earth will drop to a bone-chilling -106°C – the planet will turn into a frozen ball of ice.

At this time, the sun will only be slightly larger than Earth and much smaller than our gas giants like Jupiter. In its final stages of death, the white dwarf Sun will eventually run out of its remaining fuel, and turn into what is called a black dwarf. While we have good reason to believe this is true, it is still hypothetical as white dwarfs stay in that state for approximately 50 billion years. The Universe is only 13.4 billion years old – none of the white dwarfs we see are old enough to turn into a black dwarf. Yet.

If any life on Earth wishes to sustain itself beyond this point, it must necessarily abandon its biological and organic origins. Scientists have worked really hard to figure out the future of the sun, and all other stars and their success and accuracy has been remarkable. Our little cradle in the Universe has been good to us and reading about how little it takes for everything on Earth to go wrong helps us appreciate how lucky we are to have been born at this time in history, and at this moment in the sun’s age. So go out and enjoy some sunshine – it’s only here for another 6 billion years.