The Celestron 21061 AstroMaster 70AZ refractor telescope is an excellent choice for amateur astronomers who wish to use one scope to view both the sky and the earth. The AstroMaster sports erect image optics to give you this versatility, a pre-assembled tripod and permanently attached StarPointer for ease of use, and an affordable price tag. The result is a reliable, strong-performing, and well-regarded telescope. 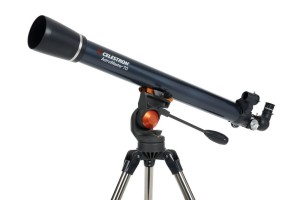 The specs on the AstroMaster reveal a relatively lightweight telescope that is powerful enough to view major celestial objects with ease. Following are a few of the scope’s most important specs:

The AstroMaster stands out from the competition because it allows for both terrestrial and celestial viewing. The scope achieves this versatility by providing erect image optics, which are only found in a few types of telescopes. Some scopes only offer inverted image optics that work well for viewing the nighttime sky but which make it harder to view anything on the earth. Erect image optics, on the other hand, allow the telescope to display the images in an upright position, providing clear images of both land and sky.

The AstroMaster is also distinctive because of a number of features that make it easy to use. In fact, these features are part of the reason it is a popular choice among amateur astronomers who want to be able to use their scope but who also want clear views of major planets and star systems. The scope comes with a pre-assembled tripod which earns praise from reviewers for its sturdiness, despite a tendency to be a bit difficult to move up and down. As a result, the scope can be readied for use in a matter of minutes, even by first time scope owners.

In addition, its StarPointer comes permanently affixed to the scope. All you need to do to view an object is to place the red dot over the object. Reviewers generally find that the AstroMaster is light enough to easily carry from place to place. It also easily attaches and detaches to the tripod and will fit on top of any other standard tripod for added versatility. Because of these features, reviewers have found that the AstroMaster allows them to more quickly embark on stargazing ventures, even when they are short on time. Other features that add to its ease of use include an accessory tray to keep eyepieces and other extra items organized and a database of 10,000 objects to provide greater detail about the objects being viewed.

The AstroMaster also serves up clear, and detailed images of numerous objects in the nighttime sky. Reviewers report being able to see the moons on Jupiter, the rings on Saturn, and up close images of the moon. Even objects further out, such as bright nebulae, are visible with the use of the AstroMaster.

Part of the reason that the AstroMaster offers such clear images is because its glass optics are completely coated. This coating improves the way in which the scope absorbs the light, providing a better image than would otherwise be possible. Reviewers also report that the scope’s focal length of 900mm is more than satisfactory. As a result, the scope, which provides a useful magnification of up to 165x, is strong enough to give you a detailed look into many of the fascinating images that populate the nighttime sky.

Finally, the AstroMaster provides you with peace of mind by including a two-year warranty. This warranty covers any defects in the parts of the scope for up to two years, ensuring its high quality construction and ability to last for years.

If you are new to astronomy, choosing a telescope may feel like an overwhelming proposition. However, the AstroMaster, with its versatility, ease of use, and solid optics, is a good investment for your money, and its ability to open up the nighttime sky promises you many fun nighttime adventures.