The star constellation Orion, named so because of the hunter of Greek mythology, is one of the most recognizable collections of stars in the night sky. Now, the excellent Orion 8945 SkyQuest XT8 allows astronomers to see it like never before, with its state-of-the-art clarity and its value for money.

The Orion name brand in the market of telescopes is one of the most recognizable due to its high-quality products. Orion Telescopes & Binoculars was established in 1975 in California. 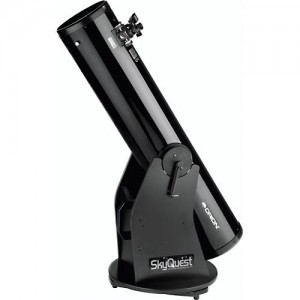 Dobsonian refers to the style of the base, popularized by the celebrated astrophysicist John Dobson in the 1960s, designed to produce large and affordable telescopes. The general distinguishing features of this particular variety of telescope include the Altazimuth mount and a large objective diameter relative to its cost.

It falls in the higher range of reflector telescopes, and there is a good balance between costs, convenience, and clarity. It is not as small as the XT6, which has been criticized for it not being able to capture good views, nor as large as the XT10, which has been said to be too bulky to carry even in the back of a car.

It is suitable for all types of stargazers, may they be beginners, amateurs, or die-hard aficionado. This meaning those who are new to the art of astronomy will find this telescope easy to use, and experts will find most of the functions satisfying. It is also family-friendly, allowing children to enjoy the fascinating hobby of stargazing or bird watching, allowing the beginning of their sky quests to flourish.

You can Attach a Camera to it

The easy-to-use finder and optical tube allows viewing of most extra-terrestrial objects like star clusters and even obscure matter such as nebulae. A camera can be attached to the telescope with a ‘T-adapter’ Setting up the SkyQuest XT8 is fairly straight-forward; the telescope comes in two easily attachable parts, which need to be connected by the integrated springs.

It should take around 30 minutes to assemble the telescope solo, or 15-20 with someone else lending a hand. You will also need a screwdriver available to assemble the parts together. The price range is around $300 to $400, affordable compared to similar Dobsonian models such as the Orion SkyQuest XT10 Classic Dobsonian whose price range falls between $550-650, though having slightly more augmented features.

The XT8 has a large 8″ (203mm) primary mirror, allowing easy viewing of various objects in the sky such as galaxies and nebulae; minute details such as moon craters can even be seen with this mirror. Even in an area with a high concentration of light pollution, it is possible to obtain very clear views of these astrological objects. This telescope also has a focal length of 1200mm, giving it a focal ratio of f/5.9. This means a very clear view can be gained of these particular objects on a clear night, depending on the magnification used.

The 2″ Crayford-style focuser on the XT8 Classic facilitates the use of 1.25-2” eyepieces, so naturally, if you feel a smaller piece is necessary, the telescope can easily adjust for this modification. It’s 46” long steel-covered tube slides effortlessly on the Dobsonian base, allowing viewers to get into the observing pocket in no time. It can also be pitched and rotated for an even more versatile and varied way of gazing into the night sky.

Additionally, the CorrecTension springs allow enough resistance, so the telescope stays upright. Talking about its balance, a particular strength that has been found with the 8945 SkyQuest XT8 is its sturdy base; if it is set up on the uneven ground, viewing the night sky is not impacted upon significantly. However, this telescope is not particularly suitable for viewing on a table- as mentioned; it is best suited for outdoor use.

It has a total weight of 40lbs, easy for some aficionados to carry around, but may prove to be a challenge for those without the easy access to, say, a car, or public transport. Depending on the retailer, some accessories may be included, such as a 25mm Plossl eyepiece, allowing 48x amplification.

Though the Orion XT8 boasts many distinctive characteristics that set it apart from comparable telescopes, there are some drawbacks. For some star watchers, this telescope may prove to be fairly heavy or bulky, especially when traveling to a particular spot to stargaze. Those who have limited storage space may find it cumbersome having to transport the telescope outside repeatedly. It has also been seen that alignment of rays, known as collimation, can be difficult to achieve.

The 25mm Plossl eyepiece that may be included in the package is also not well equipped to observe planets, especially for novice star watchers who may be more inclined to see these impressive objects first. For more advanced astronomers, the rather basic package offered may not have the adequate accessories to fully take advantage of this telescope, such as extra lenses or filters.

The Orion 8945 SkyQuest XT8 is a great telescope for any kind of observer of the skies, and especially good for families who want to introduce their children to it. Its specifications are more than capable of observing a wide array of objects, and with surprising detail- satellite craters can be clearly viewed, as well as obscure nebulae.

Its minimalistic yet very ergonomic design is also very appealing. Customers of this value-for-money telescope may want to consider purchasing additional lenses or filters to truly get the best out of this brilliant telescope.