Since the demotion of Pluto, many people question “How many planets are there in our solar system?”. In 2005, Mike Brown discovered Eris, an icy object beyond Pluto and relative in size. Due to skepticism, before Eris could be considered the tenth planet, the term ‘planet’ must be defined. 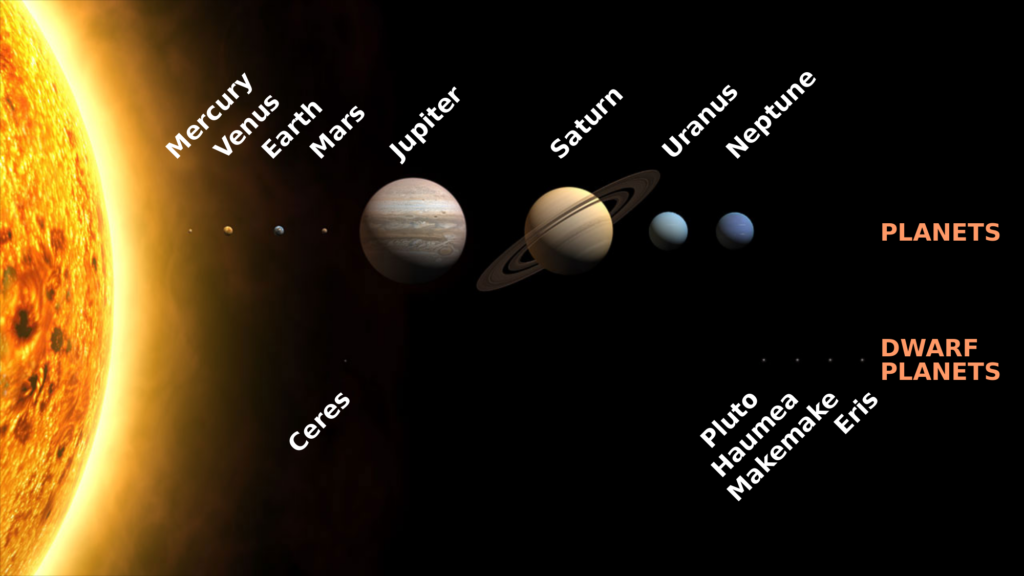 In 2006, the International Astronomical Union debated the question, “How many planets are there in our solar system?”
On one side, the total number of planets would be increased to twelve to include Pluto, its moon Charon, the Asteroid Ceres and the newly discovered Eris. On the other, Pluto would be demoted and the planets in order would end at Neptune.

Ultimately, the IAU decided a planet must meet the following criteria:

As a result, Pluto and the remaining smaller bodies were defined as Dwarf planets.

Thus, the answer to ‘How many planets are there in our solar system?” is: 8 planets and 5 official dwarf planets, Ceres, Pluto, Haumea, Makemake, and Eris.

Konstantin Batygin and Michael Brown at the California Institute of Technology proposed that a new Planet Nine is hanging out beyond the orbit of Pluto. Further discoveries in dwarf planets have also been found. A contender called 2014 UZ224 has been spotted 8.5 billion miles from the Sun. While the discoveries are significant, these potential planets haven’t been written into textbooks just yet.

Here’s a bit about all 8 planets in order:

With new discoveries happening all the time, the definite answer to “How many planets are there in our solar system?” remains uncertain. However, firm classifications for planets keeps this list at eight until sufficient evidence forces us to rewrite the books.

Even though 2019 has passed and 2020 is now here, choosing the best telescope for you may seem like... more»