Telescopes have come a long way since their invention. Progressions in technology have made it so that the telescopes of today have higher efficiency, more sophisticated designs, and higher magnification. These developments have also made telescopes larger and heavier, and that is where mounts come into play. Celestron mounts – as with their telescopes – are a popular choice. Here is why you should consider investing in the Advanced VX model. 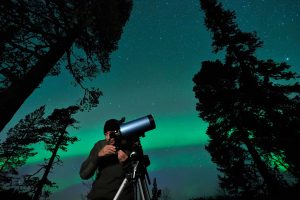 The Advanced VX, or AVX for short, can be considered a more affordable alternative to Celestron’s higher-end models. It is intended for smaller, mid-range telescopes but does not lack the features of Celestron’s more sophisticated and advanced mounts. The premise is that although it is designed for small-scale equipment, it features the same technology that larger telescopes or seasoned astronomers would make use of. This is not to say that the mount only appeals to beginners or amateurs. Experienced stargazers and astrophotographers will benefit from the AVX as well, as it is built to the same professional standard as the more highly developed mounts by Celestron are.

This is the smallest German equatorial mount that Celestron has to offer, but it is in no way limited or inefficient. The mount’s head weighs in at 17 pounds, while the tripod stands at 18 pounds. The stainless steel legs of the tripod are 2 inches in diameter. The mount in its entirety has a height adjustment range of 44 to 64 inches (1118 to 1626 millimetres). Its latitude adjustment range is between 7° and 77°.

The AVX can support up to 30 pounds, and is compatible with other accessories like cameras, focusers or Celestron’s Starsense Autoalign. One more hardware feature is the dual saddle plate, compatible with both CG5 and CGE dovetails. Switching between the two plates is effortless, and broadens the range of optical tubes you can add to your set up.

In terms of software, this mounts features are just as impressive. The AVX is a computerized mount. Its GoTo enabled, and so tracks your selected objects across the sky automatically. The mount itself also has AUX ports specifically for your hand control and autoguider, as well as two other slots for your favorite accessories and add-ons.

Speaking of the control, the NexStar+ is intended for astronomers of all skill levels, and includes a handy, descriptive menu that is simple to work with. Other software bundled with this mount are Celestron PWI telescope control, SkyAlign, and All-Star Polar Alignment, as well as Programmable Periodic Error Correction (PPEC) technology.

Celestron PWI is a highlight. It is a full astronomy suite that all computerized Celestron telescopes (and most other brands) are compatible with. This software alone includes a planetarium interface that is PointXP enabled, that you can use to designate more than 100 points for your mount to track. The complete ASCOM interface allows you to control your telescope through third party applications and software, and Celestron PWI can also be used remotely.

Last, but not least, the AVX mount also comes with Celestron’s Starry Night Special Edition planetarium software – a firm favorite in amateur astronomy. Use it to plan your viewing sessions, control your telescope through your PC, or learn more about the objects you discover.

All in all, the Celestron AVX may be intended for basic telescopes, but its capabilities are not lacking, giving it a competitive edge against other professional mounts. This mount’s specs are excellent, but no model is perfect. How does the AVX fare in its utility?

The first thing buyers will notice is that just because the AVX is the smallest of its kind, it does not mean it is compact. Many customers express surprise at how much room this mount takes up, and some consider it to be a bit too heavy for an otherwise small-scale mount. This, of course, is not Celestron’s fault, but it’s something you should prepare for if you decide to buy it.

Setting up the mount will be a breeze to those accustomed to German Equatorials. If you are unfamiliar with how to go about it, Celestron’s instruction manual is clear, concise and leaves little room for error, emphasizing that this mount is for absolute beginners and seasoned stargazers alike. One small discrepancy, however, is that initial alignment may be a bit of a fuss. Some users report that the mount’s automatic tracking is slightly inaccurate as it slews to Polaris. This is easily solved with a bit of manual fine-tuning, however, it may be more of a hassle for some users to rectify.

Regarding its build, there is little to complain about. The tripod is sturdy and strong and does well in holding your equipment up. Its leg brace doubles up as a holder that is more than sufficient in keeping your unused eyepieces or smaller accessories safe and off the ground in moments where you will need them at hand, but out of the way. You can also remove the holder for the hand controller if you like, and some astronomers prefer this as it protects the controller from damage when it is not in use.

The motors are excellent, and you will have a lot of control over their efficiency. You can control the motor speed, choosing between nine slewing speeds. Error correction settings and backlash compensation improve the motor’s performance. Another strong feature in this mount is its power. Celestron’s power tank will not degrade for hundreds of charging cycles, and is almost guaranteed to last you throughout the night to spare you the trouble of charging while viewing.

This mounts included software and operation is also a highlight. The Starry Night planetarium software is always a winner, and is recommended to newbie astronomers as it is a popular choice in navigating the skies, learning more about prominent objects, cataloging and itemizing stars and planets, and tracking objects of your choice. It is a great tool to supplement your adventure into stargazing, and for seasoned astronomers, it is a nice foundation to fall back on, or to use for entertainment or while teaching others. If all else fails, remember that you also get Celestron PWI, for more serious bouts of stargazing.

The NexStar+ hand controller is a nice addition to an already impressive mount. Pre-programmed into it are details for more than 40,000 objects, as well as information about our solar system. Two hundred of these are in-depth descriptions of favourite, prominent or otherwise notable objects. Using the controller, you can also input 100 objects of your choice. The hand controller is effective and is also easy to understand.

Although this mount was designed to compete with more professional models, you will not struggle to figure any aspect of it out. It is user friendly and comfortable to work with. Regardless, Celestron does an excellent job of explaining its ins and outs, so remember to refer to the manuals if you find yourself confused or stuck.

Most customers are satisfied with the durability of the mount, all of its components and its motors.  Still, it may be worth mentioning that some buyers complain that the motors failed after about a year or two of use. It is not clear if this is a manufacturing defect, or a consequence of neglect. As with any other mount, overloading it or handling it incorrectly could put unnecessary strain on its motors which would degrade their efficiency.

The Celestron Advanced VX mount is without a doubt a smart place for beginner astronomers to start. It is equipped with a full range of professional features, and costs significantly less than its high-end counterparts. It is made with small setups in mind, and chances are that you will not go wrong with it.

Its few flaws are not anything to write home about, and the consensus is that with proper care and frequent maintenance this mount will last you a long time. At best, its problems are mildly (and temporarily) inconvenient, and are easily fixed with some manual fine-tuning.

Serious astronomers and astrophotographers who have bigger set-ups might find this mount to be a little inefficient. Its small stature comes with limitations that excessively heavy or chunky equipment may not be compatible with. However, if you have a starter telescope or are new to stargazing and astrophotography, this mount is an excellent way to test the waters without burning a hole in your wallet or taking up too much room.

By the look of it, the Celestron AVX has made its case and amateur astronomers are in favor of it. Its biggest benefit, beyond all of its great features, is that it is affordable, yet still a high-quality and sophisticated mount. You will get all the perks of serious equipment without burning a hole into your bank account. It is well worth the money and deserves consideration based on quality alone.