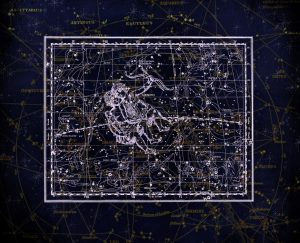 Castor and Pollux were known as the Great Twins to the ancient Babylonians. The twins were almost godlike in this mythology. They were known as ‘the one who has arisen from the underworld’ and ‘might king’ respectively.

Greek mythology also has Castor and Pollux as mighty twins. In some accounts Zeus seduces the Spartan queen Leda and she falls pregnant with Pollux. Leda simultaneously becomes pregnant with Castor by her husband Tyndareus, the Spartan king. It is uncertain who fathered the twins in different accounts.

The myth goes that after Castor is killed (because he was mortal), Pollux seeks Zeus’ hand in keeping them together in immortality, and they are transformed into the constellation Gemini. Castor and Pollux are also regarded as patron saints of sailors, appearing as St. Elmo’ fire to the seaman.

Historically, the constellation has been a place of scientific interest. William Herschel discovered Uranus on 13 March 1781, it was located near η Gem. This was not the last time the constellation was the location of a planetary discovery. Clyde Tombaugh discovered Pluto in 1930 while exposing a series of photographic plates centred on δ Gem. The constellation was also mentioned by Aristotle who observed Jupiter first in conjunction with and then occulting a star in Gemini. The observation is the earliest-known of its kind. The star is identified as 1 Geminorum, and the event dated as December 337 BC according to the suggestions of a study published in 1990.

There are many bright, naked eye stars in the constellation. However, there are fewer deep sky objects as Gemini lies away from the direction of the Milky Way.

When the German uranographer Johann Bayer assigned his stellar designations to the Gemini’s stars in 1603, he was uncertain of which was brighter between Castor and Pollux. He designated Alpha to Castor and Beta to Pollux. Bayer’s designations remain even though we know now that Pollux is the brightest star in Gemini.

Compared to other constellation in the zodiac, Gemini’s deep sky objects are sparse as its location along the zodiac is directed away from the Milky Way.

The Epsilon Geminids peak between the 18th and 29th of October. They overlap with the Orionids and are difficult to detect visually. They were only recently confirmed due to these factors. Worry not: one of the best meteor showers of the year is the Geminids which peak on 13th – 14th December for 2018.

The 2018 Geminids also fall under ideal conditions, so barring unfortunate weather, they may be of the best yet and have the potential to rain down a flurry of meteors. The waxing crescent Moon also will not interfere with the overall peak, especially after it sets.

The Geminids typically have a maximum rate of 100 meteors hourly, setting it apart as one of the richest showers annually. The Geminids have been growing in intensity every year, with recent showers hitting a maximum of 120 – 160 under perfect conditions. The shower is reliable and spectacular, sometimes even beating out August’s Perseids. North America and the Pacific Basin are prime locations for this year’s Geminids, where observers can expect 100 meteors an hour on both dates.

The peak of shower appears later and less intense in southern hemisphere, and Gemini lies north of the celestial equator. Though the meteors may appear from all over the sky, the majority appear to originate from the constellation Gemini, and this is where they are most concentrated. The meteors travel at a medium speed of 35 kilometre per hour (22 miles per hour) and usually appear yellow.

All but two meteor showers originate from comets. Gemini is one these showers; believed to originate from the object 3200 Phaethon, an odd asteroid-comet hybrid.

Despite lying away from the Milky Way and its indistinct pattern, Gemini has always been a recognized constellation, featuring celestial treasures and having a marked place in ancient astronomy and modern day discoveries alike.

Keep following our constellation series for an intriguing and deeper look at the zodiac.