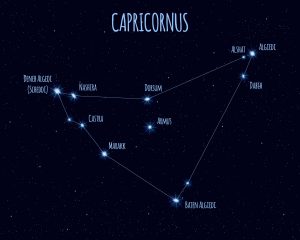 Capricornus is a southern sky constellation best recognized as being part of the zodiac. Contrary to popular belief, Capricornus is not represented by a goat, but rather a sea-goat: a half goat, half fish creature of Greek mythology.

This constellation’s name is Latin for “horned goat”, but could also be interpreted as “goat horn” or even “having horns like a goat’s”. Capricornus is the smallest formation in the zodiac, though it does make the top 40 biggest constellations overall in the sky.

How to Locate Capricornus

Capricornus is bordered by a few prominent constellations including Aquila, Aquarius, Piscis Austrinus, Microscopium, and Sagittarius. Eridanus and Pisces are nearby too, and so this area of the sky has been donned the Sea because of its collection of water-related constellations.

Capricornus can be a bit difficult to spot if you don’t know what to look for. It’s one of the fainter constellations in the zodiac and does not look anything like a sea-goat. In fact, it’s usually described as a lopsided triangle.

The best way to spot it is to locate Sagittarius, which is far more obvious, first. Then follow the ecliptic to find Capricornus wedged between Sagittarius and Aquarius.

Another way to find this constellation from the northern hemisphere is to look for the Summer Triangle asterism. If you follow a line between Vega and Altair, Capricornus’s triangle lies just a little further along this trail.

For northern observers, Capricornus will hang low in the south of the sky. For those in the southern hemisphere, you’ll have to search higher in the northern region of the sky to view it. Regardless of your location, the best time to see Capricornus is early to mid-September, at around 10 pm.

Some of Capricornus’s myth has been lost in time, and historians are uncertain of its exact origins. The most accepted theory is that this myth can be traced quite far back in Greek mythology. Capricornus is associated with both Pan and Amalthea, though the stories regarding them vary significantly.

Where Pan is concerned, the tale goes that he warned the other gods of the arrival of Typhon; a water monster sent to destroy them. In an effort to trick Typhon he suggested that all the gods hide their appearances by taking on the form of animals. Pan, who had the legs and horns of a goat, hid away in the Nile. He also changed the lower half of his body to resemble a fish, giving rise to the myth of the sea-goat.  The gods evaded Typhon, who Zeus ultimately killed, and so Pan was placed in the sky as Capricornus as a reward for protecting them.

There isn’t as much evidence to suggest that Capricornus and Amalthea were the same character, but some stories imply that they were. In these renditions, Amalthea is the goat which suckles Zeus as an infant, while hiding away from Cronos, his father. Cronos had an intense fear due that one of his children would rise to defeat him – since this was prophesized – and so he would devour all his offspring in an effort to stop this from coming true.

Still, other sources state that Capricornus can be traced back as far as 1,000 BC, as part of Sumerian and Babylonian catalogs. We also know that back in the Bronze Age, Capricornus was the signifier of the winter solstice.

Stars in the Constellation Capricornus

Capricornus may be one of the faintest constellations to the naked eye, but there are still some fascinating points to look out for when you stargaze. It contains a collection of stars that are worth observing, three of which have known planets.

An additional two stars are also thought to orbit Delta Capricorni. They are Delta Capricorni C and Delta Capricorni D. The star system is close to the ecliptic and so can be occulted by the moon and to a less frequent degree, the planets too. It’s situated 39 light-years away from Earth. Its traditional name is derived from Arabic, and means “the tail of the goat”.

Dabih Major has at least three stars in its system, the brightest of which is a giant star just under magnitude 4.0. Dabih Minor is a double star also containing a giant star. Beta Capricorni is 328 light-years away from us, and its traditional name, Dabih, stems from the Arabic for “the butcher”.

Though Capricornus is a fairly large constellation, there is only one notable deep sky object within it: the famous Messier Object M30, a globular cluster.

The exact way in which globular clusters are formed is not well-established yet, but some models suggest M30 is the result of a satellite dwarf galaxy, rather than a cluster which formed in the Milky Way. This is because it follows a retrograde orbit through the inner galactic halo.

Of these Alpha Capricornids is the best for viewing and occurs between July 15th and August 10th. This meteor shower has relatively bright meteors for you to spot, but keep in mind that they are infrequent.