What is the zodiac in astronomy, and how does it differ from astrology? 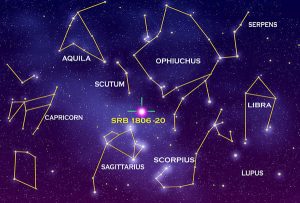 In astronomy, the zodiac is the area of sky containing the constellations which lie along the apparent path of the Sun as it travels across the celestial sphere (the Earth’s poles and equator projected into the sky). This path is called the ecliptic. The Moon and planets also move across the sky within the belt of the zodiac.

Firstly, astrology uses the zodiac to try to interpret people’s personality traits and predict the future. There is no scientific evidence to suggest that our lives are determined by the constellation the Sun is in when we are born. Another point of difference is that the Sun passes through the major constellation Ophiuchus (found between Scorpius and Sagittarius) and so that technically makes it part of the zodiac. Ophiuchus was always recognized as a constellation, even by the Babylonian, Greek, and Roman astronomers at the time. It is still recognized (and officially so) by the modern International Astronomical Union. However, the ancient Babylonian astronomers needed the zodiac to correspond to the 12 months, and chose to omit Ophiuchus from the Zodiac. This is a fact astrologers ignore in their ‘calculations’ and predictions.

The Babylonians also divided the zodiac into 12 equal arcs of 30° of celestial longitude, so that each corresponded to the twelve months. The reality is that constellations are not equally sized. This means that, following its path, the Sun is in certain constellations for much longer periods than others. An astrologer might tell you that you were born under the sign Capricorn (due to the Babylonians dividing the constellations equally and conveniently) when the reality may be that the Sun has long since left the Capricorn, and already entered the constellation Aquarius.

Lastly, the orientation of the Earth’s axis changes slowly over hundreds and thousands of years. The result is that the time at which the Sun is in a specific constellation is now very different from the time of the Babylonians, though astrologers still use this outdated information to tell fortunes!

Fortune-telling aside, the way the ancient Babylonians set up the zodiac is still a convenient system, and remains the basis of the ecliptic coordinate system astronomers use today. The 12 constellations of the zodiac that make up this system are Aries, Taurus, Gemini, Cancer, Leo, Virgo, Libra, Scorpius, Sagittarius, Capricornus, Aquarius and Pisces.

The Science of the Zodiac

Precession of the Equinoxes

The ecliptic is defined as the yearly path the Sun follows on the celestial sphere. Astronomers define the zodiac as a belt of space that extends 9° to either side of the ecliptic. The orbits of the Moon and the major planets remain within this belt, and stars within the zodiac can therefore be ‘eclipsed’ by the Moon and other Solar System bodies (this is known as occultation).

The 12 Traditional Constellations… And Ophiuchus

Here are brief introductions to the 13 constellations we will explore and expand on in future articles. The dates given after each constellation boundaries as defined by the International Astronomical Union in 1930, showing when the Sun enters and leaves the actual constellations.

Aries 19 April – 13 May: Aries is located in the northern celestial hemisphere. Aries is Latin for ram, which is what the constellation represents. Aries is a mid-sized constellation, ranking 39th overall of the 88 official constellations.

Taurus 14 May – 19 June: The name Taurus is Latin for bull, which the constellation quite clearly depicts. It is a large and recognizable constellation, as well as one of the earliest constellations recognized by man.

Gemini 20 June – 20 July: The constellation Gemini is associated with the twins of Greek mythology, Castor and Pollux. The name Gemini is the Latin for “twins”. It was one of the constellations described by astronomer Ptolemy in the 2nd century AD.

Cancer 21 July – 9 August: The name cancer is Latin for crab, as the constellation is most commonly depicted as this sea creature. It is a medium sized constellation containing rather faint stars. However, the open cluster Praesepe (M44) lies at the constellation’s centre, and is a popular target for amateur observers.

Libra 31 October – 22 November: Libra gets its name from the Latin for weighing scales. It is a rather faint and indistinct constellation. It lies between Virgo and Scorpius. Beta Librae, also known as Zubeneschamali, is the brightest star in the constellation.

Scorpius 23 November – 29 November: Scorpius is one of the constellations identified by Ptolemy, and gets its name from the Latin for scorpion. It is a large and ancient constellation located south of the celestial equator, close to the centre of the Milky Way. It is easily recognized by its many bright stars and distinct scorpion shape.

Ophiuchus 30 November – 17 December: Ophiuchus is a large constellation which gets its name from the Greek for serpent-bearer. It represents a man grasping the snake of the constellation Serpens. Ophiuchus was one of the constellations listed by 2nd-century astronomer Ptolemy. Though it is technically part of the zodiac, it was excluded by the ancient Babylonians and still is by astrologers today.

Capricornus 19 January – 15 February: Capricornus is Latin for “horned goat” or “goat horn”, and is usually depicted as a sea-goat: a mythical creature that is half-goat, half-fish. It is one of the 48 constellations listed by Ptolemy in the second century, and is the smallest constellation in the zodiac.

Pisces 12 March – 18 April: Pisces is the Latin plural for fish. It lies between Aquarius to the west and Aries to the east. The ecliptic and the celestial equator intersect within Pisces (for now), and that point of intersection is called the vernal equinox (the autumnal equinox is the other point of intersection, lying in the constellation Virgo.)

The constellations of the zodiac certainly do not govern our personalities or lives, but they have a rich history and mythology, are a true part of the astronomical coordinate systems, and have real gems hidden within – from clusters to nebulae and more.

Follow this zodiac series for more in depth knowledge of the constellations, from Aries to Pisces.