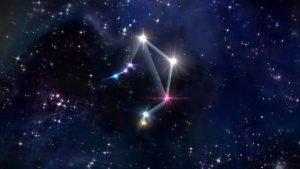 How to Locate Libra

Libra is not a very prominent looking constellation, but it can still be found easily enough with a little star-hopping. It lies between the zodiac constellations Virgo, to the west, and Scorpius to the east. From the Northern Hemisphere, you can look to the Big Dipper in Ursa Major as a starting point. Then trace the arc of the handle down to the bright, orange-yellow star Arcturus in the constellation Boötes. From there, head down to Virgo where you can spot the brightest star Spica. Libra is right next to Virgo.

From the Southern Hemisphere, you can start at Antares, the orange-red star at the heart of Scorpius and head west to Spica. Libra is wedged right between the two and forms a quadrangle or kite-like shape. It is marked by its two brightest stars, the awesomely named Zubeneschamali and Zubenelgenubi.

Libra is visible from most locations on the planet since it is part of the zodiac which lies close to the celestial equator.

Libra is one of the most ancient constellations. The 1st Century Greek astronomer and mathematician Geminus of Rhodes mentions Libra in his book Introduction to the Phenomena. This beginner’s guide to astronomy described the zodiac, constellations, motion of the Sun and other important foundations of astronomy.

Libra has long been associated with law and fairness. The Babylonians knew the constellation as MUL Zibanu which translates to ”scales” or ”’balance”. They also associated Libra with the sun god Shamash who represented truth and justice.

The ancient Greeks saw Libra as the Scorpius” claws. Strangely enough, the Arabic word zubānā means ”scorpion’s claws”, and closely resembles the Babylonian ”Zibanu”. This could be why Libra became known as the scales over time.

To the Romans, the constellation Virgo embodied the star maiden Astraea; goddess of justice and keeper of the scales of justice. On the other hand, the ancient Egyptians saw the asterism formed by Libra’s three brightest stars as a boat constellation.

One aspect that does make Libra significant is that the constellation was the location of the autumnal equinox in ancient times, so the equinox was also known as the ”First Point of Libra.” This is one of two points where the ecliptic and the celestial equator intersect and marks times of the year where day and night are pretty much equal. It is not a stretch to believe that the depiction of scales may have alluded to the equal lengths of day and night at the equinox. Libra is no longer the location of the autumnal equinox due to the precession of the equinoxes.

Stars in The Constellation Libra

Libra does not have many bright stars, but there are some significant stars within the constellation and a few exoplanets. Libra’s brightest stars form a kite pattern outlining the constellation. The stars Alpha Librae and Beta Librae are generally considered to represent the balance beams of the scale and stars Gamma Librae and Sigma Librae make up the weighing pans.

In spite of its ”Beta” designation, Zubeneschamali is the brightest star in the constellation Libra. The magnitude 2.61 dwarf star is 100 times more luminous than the Sun. It is also has a radius nearly 5 times bigger than the Sun. Variations in Zubeneschamali’s luminosity suggest that it may have a companion star.

This multiple star system lies in close proximity to the ecliptic, which is the apparent path the Sun, Moon, and planets follow across the sky. This means that the system and can be occulted by the Moon, or more rarely by the planets. To highlight just how rare such occultations are, the next one will be in the year 2052 when Mercury will obscure the system from view.

HD 140283 is a sub-giant star and it is very poor in metal – it’s iron content is about only 1% that of the Sun. The star is almost entirely made up of hydrogen and helium. The Methuselah Star is certainly one of the closest metal-poor stars to the Sun. It lies only 190 light-years away and has an apparent magnitude just over 7. It is quite an easy stellar target using both binoculars and small telescopes.

The star Gliese 581 has its own planetary system. Three of the planets are confirmed planets while a further two possible planets remain unconfirmed. Exo-planets are always of interest to astronomers and become even more important when it is possible that they could harbor life.

The planets Gliese 581d and Gliese 581g are both thought to be possible candidates for hosting life. Whether Gliese 581g is actually a planet orbiting the star is still up for debate, with not enough evidence to prove or disregard the planet’s existence yet. Gliese 581g is thought to lie near the middle of the habitable zone and is believed to be a tidally locked planet. Together with its possible location in the habitable zone, this could be quite an important discovery since recent studies have shown that tidally locked planets could still support life.

Then there is Gliese 581c. It is considered the first Earth-like exoplanet found within its parent star’s habitable zone. Another one of the star’s planets is Gliese 581e. This planet is one of the exoplanets with the least mass which astronomers have found to date. In spite of the many debates that may revolve around these planets, all of them are very important in the study of possible life outside the Solar System.

Libra is home to a few galaxies. There are no Messier Objects in the constellation.

There are no major meteor showers of note radiating from Libra, but there are some minor showers. The May Librids meteor shower has a very short period. It occurs from approximately May 1st to May 9th, generally peaking on the 6th. A maximum of 2 to 6 meteors can be seen per hour.