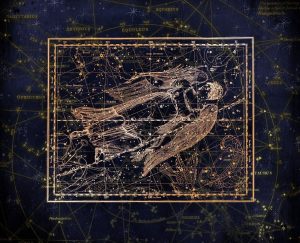 Virgo gets its name from the Latin word for virgin, which it only very loosely represents; marked by a few naked eye stars. You can find Virgo on in the spring and summer months in the northern hemisphere, or in fall and winter in the southern hemisphere. It is wedged between Leo to its west and Libra lying to the east. Northern hemisphere observers can also find Virgo by tracing it along the arc of the Big Dipper, then heading over to the star Arcturus in the constellation Boötes before reaching Spica along the same line. Other neighboring constellations include the constellations Boötes, Coma Berenices, Corvus, Crater, Hydra, and Serpens.

Virgo has the distinction of being the constellation in which the First Point of Libra, or the autumn equinox point, lies. This is one of two points where the celestial equator and the ecliptic cross (the other point is the First Point of Aries or the spring equinox point). The point was named for when it was first noted in the constellation Libra but is now in Virgo due to the precession of the equinoxes (how the Earth’s axis slowly changes orientation relative to the backdrop of stars).

History and Mythology of The Constellation Virgo

Virgo has always been viewed as a woman in some way or another since ancient times. The Babylonian’s recognized Virgo as far back as the 10th Century BC. They associated the constellation with the mythical goddess Shala together with an ear of grain. Grain traditionally signifies fertility in many cultures, so naturally, Virgo has also been linked with fertility. The Babylonian roots are still present in modern-day astronomy, as the star Spica gets its name from the Latin phrase for “ear of grain”.

The Sumerians had a similar interpretation of Virgo. To them the constellation was dubbed The Frond of Erua: so named since it represented the goddess Erua holding a palm leaf. Erua was the goddess of pregnancy and childbirth, so again the association between Virgo and fertility is clear.

Virgo’s correlation with grains is also present in ancient Greek culture, linking the constellation to Demeter, their goddess of wheat and agriculture. Some classical Greek interpretations saw Virgo as Erigone; Icarius’ tragic daughter. The Romans associated Virgo with their goddess of agriculture, Ceres.

Most of the constellations noted by the 2nd Century Astronomer Ptolemy are described In De Astronomica (or Poeticon Astronomicon), a book series commonly attributed to the Latin author Hyginus. Historians believe that in the book, Virgo is the representation of the mythological lady Parthenos: daughter of Apollo who died a maiden and was placed among the stars.

Beginning in the Middle Ages, Virgo was also sometimes associated with the Virgin Mary.

Stars in The Constellation Virgo

Spica has an apparent magnitude of 1.04. It is part of a close binary star system. Spica is a blue giant star, while its component is also a massive star lying about 260 light-years from Earth. This makes it one of the closest known stars massive enough and evolved enough to die in a Type II supernova event. The primary star in the system outshines the sun by about 12,000 times.

At first glance, Virgo seems to be nothing more than a collection of a handful of naked eye stars, with Spica being its most notable feature. Bringing out binoculars or a telescope reveals that Virgo is packed with targets that are both interesting and beautiful to view.