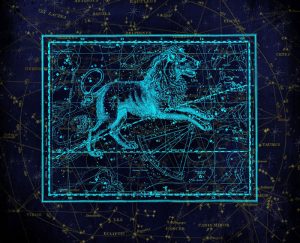 Part of what makes Leo such a well-known constellation is how easily recognizable it is. Leo is one of the constellations that actually looks like what it is meant to resemble. The constellation has a clear outline of a crouching lion. Leo also has a distinct sickle-like shape which many observers see as a backwards question mark. This asterism also helps make it quite easy to point out. The Sickle, or question mark asterism, forms the lion’s mane and shoulders.

History and Mythology of The Constellation Leo

The ancient astronomer Ptolemy included Leo is his listing of constellations, but he wasn’t the first or only to recognize the lion. There is evidence that the Mesopotamians took note of Leo as early as 4000 BCE. Other ancient people’s also have records of the constellation: ancient Persians, Turks, Syrians, Jews, Indians and Sinha all had names for Leo which translate to ‘lion’.

Leo also features prominently in ancient mythologies. The constellation Leo, to the ancient Greeks and Romans, represented the Nemean Lion which the hero Hercules kills in the first of his twelve labors. In this myth, the lion would trap women in his cave as a way to lure warriors into his lair. The men would rush into the lair to try to save the damsel taken hostage, but upon getting close, the woman would turn into a lion and devour the helpless warrior.

In his quest to conquer the lion, Hercules soon realizes that the lion’s golden fur is impenetrable. Hercules waits for the lion to return to his cave, and there he stuns the beast with his club and uses his superhuman strength to strangle the lion to death with nothing but his bare hands. Some accounts mention that Hercules doesn’t win unscathed; losing a finger to the lion during the epic struggle.

Hercules then tries to skin it with a knife from his belt, but his efforts are lost since the fur is impervious to all weapons. The goddess Athena is impressed with Hercules’ feat, and tells him to use one of the lion’s own claws.

Zeus then commemorates the hero’s accomplishment by placing the lion in the sky as the constellation Leo. There is also a Greek stamp showing the encounter between Hercules and Leo.

The ancient Babylonian astronomers called the constellation UR.GU.LA, which translates to the “Great Lion”. Regulus, the brightest star Leo, was recognized as “the star that stands at the Lion’s breast.” The Babylonians also called Regulus the “King Star”.

Some mythologists have pointed out that Leo may be the beast Humbaba, of Mesopotamian lore. The monster was said to have the face of a lion and guarded a forest, though he terrorized the humans nearby. The beast was eventually killed by the Sumerian hero Gilgamesh.

Stars In The Constellation Leo

Another reason why Leo is so easily recognized – and has been since antiquity – is that the constellation houses several bright stars. Most of the bright stars we see in Leo today were identified by ancient astronomers. Four of the stars in Leo are second magnitude stars or brighter.

Regulus looks like a single white star to the naked eye. Through binoculars, you can see that Regulus is a double star. The secondary star is a dimmer magnitude of 7.7, and is most likely a white dwarf star. Professional observations reveal that Regulus is actually a quadruple star system composed of four stars grouped in two pairs.

Regulus is one of the six stars that make up The Sickle asterism which forms Leo’s mane and shoulders.

Other stars in the constellation Leo include:

Galaxies and Other Deep Sky Objects in Leo

Along with its many bright stars, Leo also contains a number of bright galaxies and some other interesting deep sky objects.

Meteor Showers in The Constellation Leo

The Leonids are caused by Comet Tempel-Tuttle. Though the Leonids are usually nothing to write home about, the comet does some sometimes flare up, causing a significant increase in the rate of meteors we see during the Leonids showers. The normal peak rate for the Leonids is approximately 10 meteors per hour.

There is also a lesser shower radiating from Leo early in the year. The January Leonids reach its peak around January 1st and 7th but has a very low rate of meteors even at its maximum.