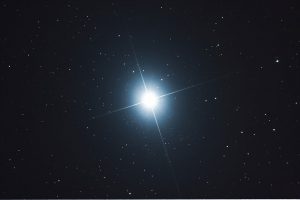 Sirius is the brightest star that can be seen with a visual magnitude -1.46. It is also known as the dog star and even sometimes called the alpha canis majoris.  Sirius is a bluish white star. The light distant is 20 times the energy of the sun. the star is most commonly seen in the northern hemisphere. If you are having trouble finding Sirius, look for Orion’s belt and draw a line through it and you will see Sirius. Sirius has a companion dwarf star with it called Sirius B.

Sirius has been seen for thousands and thousands of years. The ancient Egyptians called the star Sothis. They thought when the star rose it affected the flooding in the Nile River. They believed that this would happen every 365 days. The Romans also believed that Sirius was responsible for the hottest part of the year due to the heliacal rising.

Later Sirius was officially discovered by a German astronomer in 1844. His name was Friedrich Bessel. He had a theory that Sirius had a companion with it. In 1862 Sirius B was finally seen by a telescope by Alvan Clark, he was an American astronomer. Sirius and Sirius B revolve in orbit together. Sirius B is just as massive as the sun and it was the first dwarf star to be discovered. 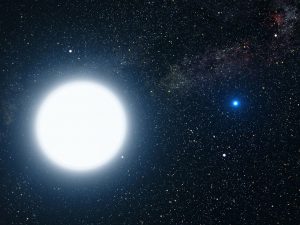 Sirius has a mass of 2.02 solar masses which is twice the mass of the sun. The diameter of Sirius is 1.7 times larger than the sun. Sirius B is very similar in size to Earth. Sirius B Has the same mass weight as the sun. This means we are talking about incredibly dense stars.

Sirius Compared to the Sun

We all know the sun is massive so let’s compare Sirius and Sirius B to the sun.

Sirius is 8.6 light years away from earth. Its coordinates are RA 6h 45m 9s | Dec -16° 42′ 58″. If you are trying to find Sirius you need to look for Orion’s belt. Located just below the belt you will see Sirius. Use Orion as your guide to looking for Sirius.  It can mostly be seen in the late winter and early spring towards the south.

Sirius is 8.611 light years away. You may think that that is a long way away but it is actually quite close to Earth. Light years are the units that are larger than miles. To calculate this, you need to multiply the speed of the light by the numbers of seconds in a year.

Sirius Falls in the constellation canis major. Which is called the greater dog. Sirius is the single brightest star in the sky. Sometimes people confuse Sirius for a planet. One way to remember the difference between stars and planets is, planets do not twinkle in the sky, only the stars do.

Sirius is a binary star that contains obviously Sirius but its companion dwarf star Sirius B. the binary system is 300 million years old. There used to only be two big stars but one of the stars used up to much nuclear fuel and shrunk very small into Sirius B.

As far as we can determine, Sirius is approximately 240 million years old. It is hard to determine the exact age of stars because they have been here such a long time, it’s hard to know for sure how long.

Typically star such as Sirius come in a bluish strong white color. Sometimes if you look long enough you might see other colors. Sometimes people call Sirius the rainbow star because it flickers many colors. Light is composed of all colors and the reason we see those colors is because of the refraction.

Sirius was named after the Egyptian god Osirius. As we know from hieroglyphics, Osirius was pictured as a dog. Which gave Sirius its more familiar nickname the dog star. After that, the Greeks gave the star the name Σείριος. That means scorcher and or glowing in Greek. There are many influences that have happened to give Sirius its name. as you know Sirius is in the constellation Canis major.

Sirius B has been closely studied because it is in its last stage of observance. White dwarf stars get dimmer and dimmer as time goes on; eventually, they will become black dwarf stars which means the star has stopped burning. So, scientists have been studying the Sirius B to make a better understanding of the stars stellar cycle.

Recently, NASA has launched a new survey satellite with the purpose to orbit bright stars such as the Sirius and find exoplanets that may orbit these stars. Sirius is quite a young star compared to other so it is unlikely for it to have exoplanets orbiting it. You really never know though. Any new information about our stars is important because it can help us to learn more about supernovas and star brightness.