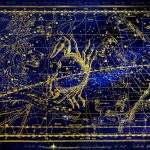 Cancer is a constellation which is part of the zodiac and is visible in both the Northern and Southern hemispheres. The name Cancer comes for the Latin for “the crab”, which the constellation traditionally depicts. It is actually quite difficult to make out any form of a crab within the constellation as most of the stars are quite faint. Only two of Cancer’s stars are above magnitude 4, making it the dimmest of the 13 constellations of the Zodiac.

Cancer was recognized by the Greek astronomer Ptolemy, who first recorded the constellation in the 2nd century. Though the constellation has been recognized for centuries, the creature it depicts has varied from one culture to the next, though it is usually described as an animal which lives in water and has an exoskeleton.

Cancer was recorded by the ancient Egyptians around 2000 BC. To the Egyptians, Cancer represented a Scarab; a sacred symbol of immortality.

The Babylonian name for the constellation could be translated to refer to a crab or a snapping turtle. The boundary stones monuments show images of a turtle or tortoise, and none of a crab.

Cancer was noted as a water beetle in a 12th century manuscript on astronomy, included with accompanying drawings. Latin translations dating back to 1488 describe the constellation as a large crayfish – the most common interpretation of Cancer in the majority of modern languages and traditions.

We still call the line of latitude marking the most northerly point at which the Sun can still be seen directly overhead the Tropic of Cancer (this occurs at the June Solstice). Due to the procession of the equinoxes, this line of latitude actually appears in Taurus now but gets the name from ancient times when it was in the constellation Cancer.

Out of 88 constellations, Cancer is the 31st largest in the sky.

In Greek mythology, Hercules is the son of Zeus and stepson to the jealous Hera who was always out to kill him and who eventually drives him insane. To make up for his horrific actions during his bout of insanity, the young hero has to complete a series of tasks. In one such challenge, Hercules must engage in a battle against Lernaean Hydra (represented by the constellation Hydra), a snake-like monster with multiple heads and breath that is like poison. Hera sends the crab Karkinos to distract Hercules during the battle so he will fail.

In one account, Hercules notices the ploy and kicks the crab so hard that it lands in the sky. In an alternative version, the crab pinches Hercules on the toe before the hero crushes Karkinos under his foot. Hera rewards the crab for his efforts by placing him in the sky but makes sure that the crab had no bright stars due to his failure.

Even though there are few bright stars in the constellation, most are still worth noting.

The star’s magnitude varies ever so slightly between 4.20 and 4.27. Acubens can be occulted by the Moon and the planets (though much more rarely) because of its close position to the ecliptic.

It has a twelfth magnitude companion, Alpha Cancri B, which is visible through a small telescope. The primary star, Alpha Cancri A, is actually two main sequence stars, while Alpha Cancri B likely consists of two red dwarfs. This makes Acubens a quadruple star system.

The crab constellation is home to two Messier objects and several galaxies and is even the location of two supernovae.

The Beehive Cluster contains over a thousand stars. Most of the stars within the cluster are red dwarfs, followed by Sun-like stars. It is relatively young compared to the age of the Solar System, estimated to be around 600 – 700 million years old.

The cluster is always being studied and observed by professional astronomers. Almost all of its stars are the same age and equally spaced from one another, but not all of the stars are at the same stage in their stellar evolution.

NGC 2682 is also one of the oldest known open clusters, with estimates of its age as high as 5 billion years old.

Another object of interest within the borders of Cancer is OJ 287. It is a BL Lacertae object, a type of active galactic nucleus located 3.5 billion light years away. It is home to one of the largest known central supermassive black holes, with a mass of 18 billion solar masses.

Cancer is a bust constellation for extrasolar planets. Ten stars within the constellation are known to host exoplanets. Rho Cancri or 55 Cancri is one such star; a binary system about 40.9 light-years from Earth. The primary star of the system, 55 Cancri A, is a yellow dwarf star with five planets in its orbit. Four of the planets orbiting 55 Cancri A are gas giants, and the fifth is a low mass planet which may either be a carbon filled planet, or a water planet.

Cancer is also home to one of the most famous exo-planets, 55 Cancri e. The planet has been described as a super-Earth and as a ‘diamond world’, due to observations at the time that hinted at large quantities of carbon in its interior. Astronomers also believed that that the planet had a graphite surface concealing a large layer of diamond. Further studies revealed that the amount of carbon present is far less than scientists originally thought, but also showed that the planet is scorching hot and may be producing a sort of lava.

The only meteor shower associated with the constellation Cancer is the Delta Cancrids; a shower of medium strength seen from December 14 to February 14. Only four meteors per hour are expected at the shower’s peak on January 17 each year. Astronomers are uncertain of the shower’s source.

Even though Cancer is the dimmest of the constellations of the zodiac, there are several deep sky objects worth observing with binoculars or a small telescope. The Beehive open cluster alone makes a trip over to the crab constellation worth your while.