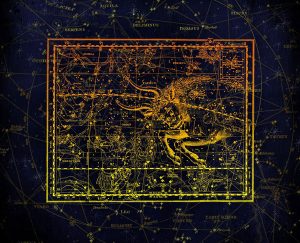 Taurus is one of the constellations of the zodiac. The name Taurus comes from the Latin word for ‘the bull’, which is the animal the constellation has always depicted. It is a big, prominent, and easily recognizable constellation which has been known since ancient times. Indeed, it is one of the oldest documented constellations. It dates back to at least the early Bronze Age when it marked the location of the vernal equinox. The constellation features in the stories of several ancient peoples and places including Akkad, Assyria, Babylon, Egypt, Greece, Rome, and Sumer.

Taurus lies between the zodiacal constellations Aries and Gemini, and is surrounded by Perseus, Auriga, Orion, Eridanus and Cetus.

The recommended three letter abbreviation as of 1922, and according to the International Astronomical Union, is “Tau”.

The identification of Taurus as a constellation possibly dates as far back as the Upper Palaeolithic Age. There is also some evidence to suggest that Taurus features in a cave painting at the Hall of the Bulls in the caves at Lascaux (the setting of complex caves near the French village of Montignac) which dates back to approximately 15000 BC.

The constellation is home to one of the most famous asterisms, the open star cluster the Pleiades. A popular common name for the Pleiades is “seven sisters”, a term which has been used for the asterism in many languages and cultures globally; suggesting that the name may have a common ancient origin.

In the Epic of Gilgamesh, an old Babylonian myth, the Goddess Ishtar is rejected by Gilgamesh. Outraged that her advances were spurned, she sends the Bull of the Heaven to kill Gilgamesh. Enkidu, who was created to help the hero overcome his ignorance, saves Gilgamesh by tearing the bull’s hind into quarters and throwing the pieces into the sky where they become the stars of the constellations Ursa Major and Ursa Minor. In some interpretations, Gilgamesh is said to be the man in the constellation Orion, facing the menacing bull in combat. Other interpretations associate Gilgamesh with the Sun.

Art from the early Mesopotamia Era show strong links between Taurus and the goddess of sexual love, fertility, and warfare Inanna.

Taurus was also seen as a scared bull to the ancient Egyptians, who associated the “Heavenly Bull” with the renewal of life in the spring. Because Taurus marked the point of the vernal equinox at the time, the Egyptians saw the Sun eclipsing the constellation as a sacrifice that would renew the land. Taurus was also depicted on the sculptured Dendera zodiac, a ceiling carving of the celestial sphere, at the Hathor temple at Dendera in Egypt.

In Greek mythology, Taurus the bull has strong ties to the god Zeus, and is portrayed in more than one mythological account. One myth recounts a tale of how Zeus transformed himself into the majestic white bull, so that he could kidnap the legendary Phoenician princess Europa. Several Greek illustrations of Taurus only show the front half of the bull, possibly to depict that the animal was submerged as he carried the princess out to sea.

In a separate account, Taurus is actually portrayed as Zeus’ mistress. Zeus changes his mistress Io into a heifer in an attempt to deceive his wife Hera, and hide his lover. It is also believed that Taurus may be the same bull featured in the Greek myth of the Cretan Bull, which was also the subject of one of the 12 labours of Hercules (to capture the Cretan Bull).

Taurus holds an important place in Buddhist Tales. It is said that Gautama Buddha was born when the Moon was full and located in Taurus. The festival which celebrates Buddha’s birthday is held on the first or second Full Moon when the Sun is in Taurus.

Lastly, Taurus was actually worshipped among the Druids; high ranking members of ancient Celtic cultures. They had a Tauric religious festival, held when the Sun passed through the constellation.

The points where the celestial sphere (a projection of the equator and poles unto the sky) and the ecliptic (the apparent path of the Sun) intersect are known as the equinoxes. This is also when day and night are of equal length. Taurus marked the location of the vernal equinox in the Copper and early Bronze Ages; and is one primary reason why the constellation was so important in the cultures of the time. Due to the procession of the equinoxes – when the Earth’s axial tilt slowly changes orientation over many thousands of years – the vernal equinox left Taurus and entered the constellation Aries. It now lies in Pisces.

Taurus is quite unique because of its location in celestial coordinate systems. It does not only lie on the zodiac which of course intersects the ecliptic, but is also intersected by the galactic plane of the Milky Way on the northeast corner of the constellation. This makes it the only constellation to be crossed by all three of the celestial equator, the ecliptic and the galactic plane. The galactic anti-centre, the direction of space directly opposite to our galaxy’s centre, lies near the border of Taurus and Auriga.

Gould’s Belt, a partial ring of stars in our Milky Way, also passes through the constellation.

It is interesting to note that the space probe Pioneer 10 is headed in the direction of Taurus, though it will not approach any of the constellation’s stars for several thousand years, by which time its batteries will long since be dead.

There are two famous asterisms, both of which are also open clusters, located in Taurus. The first is the Hyades, which is a V or K shaped pattern of stars forming the head of the bull. The Hyades is the second-nearest distinct open cluster to Earth. It is quite large for an asterism, extending 5° across the sky. It’s most prominent stars are easily viewed with the naked eye and it makes an excellent binocular target as well. It includes the visual double star Theta Tauri, which is a real challenge to resolve with the naked eye.

The Pleiades could take the place of the most famous asterism in the night sky. It is easily viewed with the naked eye. The seven most prominent stars in the cluster have led the asterism to commonly be called the seven sisters. Many more stars become visible within the cluster using binoculars or a small telescope. The cluster comprises of some 500 to 1000 stars, all around 100 million years old, but with varying spectral types. Astronomers predict that the cluster will dissipate in 250 million years.

The brightest star in Taurus is Aldebaran. It is an orange coloured star forming the bull’s eye in the asterism Hyades. Taurus’ horns are formed by the stars Beta and Zeta Tauri. Beta Tauri is the second brightest star in the constellation, and also shares a border with Auriga. For this reason it also has a second designation of Gamma Aurigae. Zeta Tauri is an eclipsing binary star with a period of 133 days. The star Lambda Tauri is also an eclipsing binary, whereas Kappa Tauri is a visual double star so close together that it cannot be spilt with the naked eye.

Taurus is the location of T Tauri, which is a prototype of a class of variable stars called T Tauri stars, which have extremely erratic luminosities. T Tauri is a newly formed star which has not yet entered the main phase.

Taurus houses part of the Taurus-Auriga complex (also called Taurus dark clouds) which is a star forming region containing filamentary clouds of gas and dust. It is one of the closest active star forming regions to Earth, located only 490 light years away.

NGC 1514, also called the Crystal Nebulae, is a planetary nebula in Taurus which was discovered by the German-born English Astronomer William Herschel in 1790. The object was known before this time, but it was mistaken for a group of unresolved stars. However, Herschel was able to resolve a star at the nebula’s centre. The English astronomer William Huggins analysed its spectrum in 1864, proving the nature of the star.

Located in Taurus is the supernova remnant Messier 1, more commonly known as the Crab Nebula. The supernova itself was first seen form Earth on the 4th of July 1054. There are records of it in ancient Chinese text. The supernova was bright enough to be seen during the day, shining at an magnitude –4. The remnant is currently magnitude 8.4, and can only be viewed with optical aid.  Although astronomers knew of the event, the remnant was only discovered in 1731 by John Bevis.

Pointing your binoculars or telescope toward this ancient constellation is a very rewarding viewing experience. There are certainly many treasures and rich histories revealed in the other constellations of the zodiac, so be sure to follow this informative series.