The hunter constellation Orion heralds the changing of seasons across the globe. As it rises, so does one of the brightest stars in the sky: Rigel. The blue-white gem is in stark contrast to Orion’s other famous star, the red-orange Betelgeuse. At magnitude 0.12, Rigel is the brightest star in Orion, but Betelgeuse sometimes does outshine it because Rigel is a semi-regular variable star. 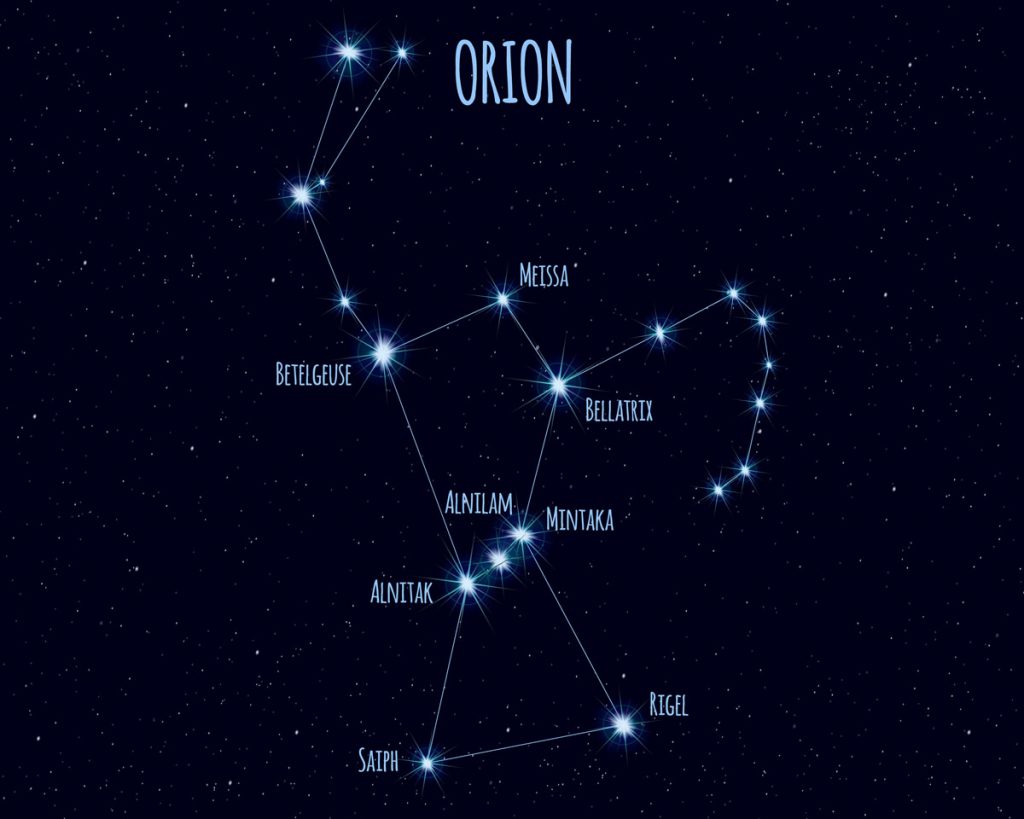 Rigel can be seen in the northern hemisphere from late autumn to early spring and is a fixture of the summer months in the southern hemisphere. Rigel is located on the celestial equator, so it is clearly visible for extended periods in both hemispheres and can be seen from all the world’s oceans and seas, barring the region within 8 degrees of the North Pole. As such, Rigel has always been an important star in navigation and is very easy to observe with binoculars and small telescopes.

Rigel also forms part of the Winter Hexagon or Winter Circle; an asterism outlined by the stars Rigel, Aldebaran, Capella, Pollux, Procyon, and Sirius. The asterism is best viewed from the northern hemisphere.

The original Arabic name that Rigel is derived from is Rijl Jauzah al Yusrā, meaning ‘the left leg or foot of the Great One [Orion]’. This ancient mention of the star dates back to at least the 10th Century. Other obsolete Arabic names for the star include Rigl al-Gabbar, and the similar names Algebar and Elgebar. The first record of the anglicized name Rigel dates back to 1252 in the Alfonsine Tables: a collection of astronomical data that was used to calculate the position of the Sun, Moon, and planets.

Johann Bayer designated Rigel ‘β Orionis’ or ‘Beta Orionis’ in 1603. Stars designated ‘beta’ are usually the 2nd brightest star of their constellation. For this reason, modern astronomers believe that Johann Bayer observed Rigel and Betelgeuse during a rare period in which Betelgeuse outshone Rigel – a result of both stars’ variability. This would explain his designations of Betelgeuse as Alpha Orionis and Rigel as Beta Orionis.

Rigel is an officially recognized star name and is included in the International Astronomical Unions’ Catalog of Star Names.

Since Rigel is generally the 7th brightest star in the sky, and because of its location in Orion and proximity to other prominent constellations and stars such as Taurus and Sirius, Rigel has significance to many cultures throughout history.

There a few significant modern inventions and discoveries which have been named after the star Rigel:

How Far is Rigel from Earth?

Like the Solar System, Rigel is located in the Milky Way Galaxy. There are different ways to calculate how far Rigel is from Earth, so the star’s true distance from the Sun remains somewhat uncertain; differing depending on the method used to get the estimate. Some calculations show Rigel to be 863 light-years or 265 parsecs away from the Solar System. This estimate has a margin of error around 9%.

We may also take the estimated distance of a companion star to Rigel, resulting in a distance of 1,100 light-years or 340 parsecs from Earth. This method is problematic as the measurements for the companion are unreliable.

Another route in finding Rigel’s distance from the Sun is working around the distance of the Orion OB1 Association: a very loose group of stars which form part of the constellation. Rigel is one of these stars, lying on the outskirts of the stellar association. The association as a whole is up to 1,600 light-years or 500 parsecs from the Sun. Rigel also belongs to the Taurus-Orion R1 Association, a larger but more a loosely-defined collection of stars. This cluster is closer to Earth than the OB1 Association, lying at 1,200 light-years or 360 parsecs away.  Astronomers believe that Rigel is much closer to the Earth than the majority of stars in the Orion OB1 Association and the Orion Nebula.

Rigel also lies quite close to our line of sight of the Orion Nebula, so the star is often associated with it. In reality, the Orion Nebula is almost twice as far from the Sun as Rigel.

Rigel is a young, hot and massive star. It has a mass of 21 Solar Masses, and may even be as massive as 24 Solar Masses. Rigel’s radius is more than 70 times that of the Sun.

Even though Rigel may be heading toward the final stages of its stellar lifecycle, it is very young relative to other stars, including our own. While the Sun is approximately 4.6 billion years old, and only halfway through its life, Rigel is only about 7 – 9 million years old.

Rigel is a blue supergiant star, a type of star which is not the norm in the Milky Way. Owing to how relatively uncommon these types of stars are and the uncertainty in measuring their distances from the Sun, it is considerably difficult to draw accurate conclusions on their physical characteristics. Most of what we understand about Rigel’s properties are taken from theoretical models of a star’s evolution.

Rigel appears as a single brilliant point of light to the unaided eye, but professional observations reveal it belongs to a multi-star system containing at least four stars that we know of: Rigel A, Rigel Ba, Rigel Bb, and Rigel C. The name Rigel is specifically used to refer to the primary star of the system, Rigel A, though it has also been used to describe the entire system. Rigel’s companion appears to be a triple star system, which as a whole is referred to as Rigel B.

Rigel A is a blue supergiant star which formed about 7 to 9 million years ago. Though it is very young compared to the Sun, it has already exhausted its supply of hydrogen in its core. Stars expand and become cooler as they age and move away from the main sequence of the Hertzsprung–Russell diagram. At 12,000 K, an aging Rigel is still much hotter than the Sun. During the prime of its cycle, a star like Rigel could reach temperatures of around 30,000 K.

Stars as massive as Rigel certainly have their own unique curve in stellar evolution. Astronomers believe that Rigel may have already passed through a red supergiant phase and was much cooler than it is currently. The star then increased in temperature and became a blue supergiant for a second time round. Through all of these changes, Rigel has probably lost around 3 Solar Masses compared to the mass it once had during its main sequence.

Supergiant stars like Rigel also have some of the most astounding and cataclysmic deaths in the cosmos. Rigel is expected to eventually end its stellar life as a Type II supernova. The star will rapidly collapse on itself as it can no longer support its great weight, and this will trigger a massive explosion. Rigel has the potential to be one of the closest supernovas to Earth, but will not pose any threat to life on the planet. Instead, observers at the time will be treated to a brilliant display: a star of magnitude -11, as bright as a quarter Moon.