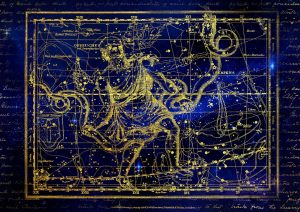 Ophiuchus wasn’t always a popular or talked about constellation, but it’s a treat for amateur astronomers to explore. It is rising in prominence due to its size, position, and notable objects– not to mention its fascinating history that has compelled more people to pay attention to it in recent times.

Ophiuchus, which is also sometimes called by its Latin name Serpentarius, was one of the first constellations recognized and documented by the 2nd Century Greek astronomer Ptolemy. Though its form is vague, Ophiuchus represents the mythological healer, Asclepius. It is a southern sky constellation that you can spot near the celestial equator.

Its location has caused some confusion. Because it crosses the Eliptic (and is positioned in between Scorpius and Sagittarius), it’s often incorrectly assumed that Ophiuchus forms part of the Zodiac. In reality, it’s included in a family of constellations known as the Hercules family: a group of constellations that share several important features such as how close they lie to the celestial sphere and a common history.

How to Locate Ophiuchus

Ophiuchus isn’t as obvious as some other constellations, but it won’t be difficult to find if you know what to look for. It’s the 11th biggest constellation of the 88. The southern end of Ophiuchus is wedged between Scorpius which is east of the constellation and Sagittarius to the west. Other bordering constellations are Libra, Aquila, Serpens, and Hercules.

This constellation is easily viewed in the southern hemisphere during winter. In June, it will be overhead at midnight and is visible through to October, when you can see it in the evenings.  You can pinpoint it by its brightest star, Ras Alhague.

Even though most of Ophiuchus’s area lies south of the equator, you can still see it from the Northern Hemisphere. Just look opposite Orion during the summer months. However, from the Arctic Circle it becomes more difficult to observe it because of the midnight sun obscuring it and its low position on the Horizon anyway. What’s interesting though, is that even from the Arctic Circle you may still be able to see it for a few hours in the afternoon, when the Sun lies below the horizon and daytime stars can be observed.

Ophiuchus is closely linked to the myth of Asclepius, who had healing hands and could revive the dead. He was the son of Apollo, who discovered how to heal by observing snakes.

In one story, Prince Glaucus died after drowning in a container of honey. A snake approached Glaucus’ body, and Asclepius killed it before it could make its move. A second snake then placed a healing herb on its dead body, and the snake was revived. Having witnessed this, Asclepius then placed the herb on Glaucus’s body, bringing him back to life.

Other variations say that Asclepius was taught how to heal by Chiron– a centaur. There is also a tale in which Athene gives Asclepius the healing blood of Medusa, subsequently giving him the power to resurrect.

Because he was so powerful, other gods saw him as a threat to the balance of the world. Hades grew concerned that Asclepius’s power would cause a shortage of dead souls for him to manage. He complained to his brother, Zeus, who then struck and killed Asclepius with a lightning bolt.

Zeus then projected Asclepius’s likeness into the sky as the constellation Ophiuchus, to honor his spirit and good contributions to the world.

There are also some suggestions that Ophiuchus stems from the Babylonian myth of the god Nirah, who was associated with snakes and believed to sometimes take on the appearance of a snake.

Ophiuchus contains a variety of notable stars. Amateur observers can find binary stars, variable stars and even supernova in this constellation.

As with its stars, Ophiuchus is home to a range of deep sky objects from prominent nebula to beautiful clusters. It contains seven Messier Objects.