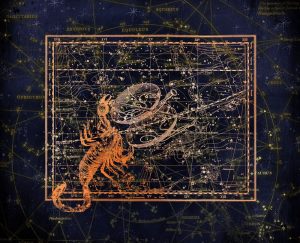 Scorpius can be seen in most parts of the world, but it actually lies south of the celestial equator and quite close to the centre of the Milky Way galaxy. This makes it harder to see very far North, but visible for several months to southern observers.

The constellation has the distinct shape of a scorpion, which it represents. Scorpius houses many bright stars – including the one of the brightest in the night sky – the red star Antares found at its centre. The star’s red hue is so that its name literally means “Rival of Mars”.

How To Locate Scorpius

Scorpius is probably one of the easiest constellations to find. It is a very large constellation, has many bright stars and a distinct scorpion-like shape. You will find the constellation Libra to the west of Scorpius and Sagittarius to the east. July and August are generally the best months to view Scorpius in the Northern Hemisphere.

For most northern latitudes in the states, Scorpius never climbs high in the sky but appears to just be skirting along the horizon. You will need a good unobstructed view of the south to see the full constellation. And of course, the further north, the less of the constellation you can see. Indeed, the tail does stay partially hidden below the horizon for most of its appearance in the extreme northern latitudes, but the brilliant star Antares remains steadily visible as far north as southern Alaska.

The constellation can easily be seen from March to October in the Southern Hemisphere, where it is ideally located.

Scorpius is the Latin for scorpion. In both Roman and Greek history, the mythology of Scorpius is closely linked to the mythology of Orion the Hunter. The story goes that Orion, a strong but somewhat arrogant huntsman, proudly boasted to goddesses Artemis and Leto that he was cable of killing any animal on Earth.

Gaia, goddess of the Earth, protected animals and did not take kindly to Orion’s boastful threat. She sent the scorpion to deal with Orion, during the battle between the man and beast, Orion was killed by the scorpion. The rest of the myth goes that Zeus placed Scorpius on the opposite side of the sky from the Orion. Other variations of the myth tell of different motives for Artemis sending the scorpion to kill Orion, and still others have Artemis herself slay the hunter.

The Babylonians recognized the constellation dating back 3000 years, and called it MUL.GIR.TAB which translates to ‘Scorpion’. The literal translation can be read as ‘creature with a burning sting’.

There are ancient Babylonian and Arabic descriptions of the Scorpius in which the constellation Libra is treated as the scorpion’s claws rather than as its own independent constellation.

In spite of the constellations distinct shape as we know it in modern/ Western astronomy, there are old cultures which recognize Scorpius as something else. In Indonesia, the constellation is called Banyakangrem, a swan; and also sometimes called Kalapa Doyong, meaning a leaning coconut tree.

In Hawaii, Scorpius is associated with the Big Fishhook of Māui.

Stars in the Constellation Scorpius

Scorpius is home to several bright stars. The constellation has almost a dozen stars all below magnitude 3.

Scorpius’ location against the backdrop of the Milky Way, close to the galactic centre, makes it quite rich in deep sky objects, including some wonderful Messier objects which can be seen with the naked eye.

The main meteor shower in Scorpius is the Alpha Scorpiids which roughly occurs between April 21st and May 26th. The shower usually peaks around May 15th every year. Antares is the closest star to the radiant point.

The Alpha-Scorpiids is a faint meteor shower with a Zenith Hourly Rate (ZHR) of 3 -5. That just means that you will only see about 3 – 5 meteors per hour radiating from that point in Scorpius. This number can sometimes increase, though not very dramatically.