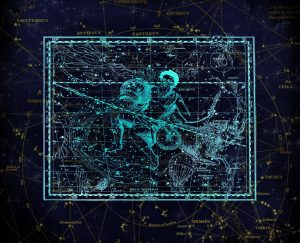 Aquarius is part of the zodiac and is located in the southern hemisphere. It is found in a part of the sky nicknamed the Sea. This region is so named because of its abundance of water-related constellations including Pisces, Capricornus, Eridanus, and Cetus.

Aquarius was cataloged by the 2nd Century Greek astronomer Ptolemy. The constellation is recognized for its collection of notable celestial objects including Messier objects, galaxies and even nebulae. Its name is Latin for “the water bearer”, and it is represented by a human healer pouring water onto the ground.

How to Locate Aquarius

Aquarius’s form may be abstract and difficult to immediately spot, but it is actually the 10th biggest constellation in the sky. It is also surrounded by a number of significant constellations including Aquila, Capricornus, Pegasus, Pisces, Piscis and Sculptor among others. If you are not using a star map, and don’t know your pointers well, the simplest way to spot Aquarius would be to locate it by its bordering constellations.

Because the stars in Aquarius are not significantly bright, you will need as little light pollution as possible to observe it well. Regardless of the hemisphere you’re in, October and November is when it will be highest in the sky for easy locating.

This constellation as an asterism within it known as the Water Jar; a defined zig-zag of stars best viewed under dark skies. It points to Sculptor on one end and ends between Capricornus and Pisces on the other.

There are a few myths surrounding the constellation Aquarius. The most prominent one is from Greek mythology which follows Ganymede, a young and handsome man. Because of his appeal, Zeus chose Ganymede as his own and made him a cup-bearer to the gods.

Ganymede eventually grew tired of serving Zeus and in an act of rebellion, spilled all the nectar, water and wine that was meant for them. According to the myth, this caused an onslaught of rains that fell to Earth and subsequently flooded it.

Zeus’s first instinct was to punish Ganymede, but because he had a soft spot for him, he was immortalized as the constellation Aquarius instead.

In other myths, Aquarius is associated with Deucalion, Prometheus’ son and a survivor of the great, devastating flood. In Babylonian stories, Aquarius is sometimes linked to Enki, whose mythology features water quite a bit. Egyptian folklore links Aquarius to god of the river Nile.

Stars in the Constellation Aquarius

There are only two stars brighter than magnitude 3.0 in Aquarius, but what is notable is that this constellation has a number of stars with known exoplanets.

Aquarius has a range of deep sky objects for you to enjoy. This includes three Messier objects, galaxies, and nebula. Aquarius is a great spot to aim your binoculars or telescopes, and is home to a few popular objects among amateur astronomers.

There are three prominent meteor showers in Aquarius.

The Eta Aquariids are the strongest shower, sometimes reaching up to 40 meteors per hour. It begins late April and ends mid-May, peaking between May 5th and 6th, with an average 35 meteors per hour.

The Delta Aquariids meteor shower has two radiant points. The first is Aquarius’s southern region, while the other is the northern circlet of the Pisces asterism. It usually peaks from the end of July through to the beginning of the second week and sometimes even the third week in August. They have about 20 and 10 meteors hourly respectively.

The Iota Aquariids is somewhat weaker, with less than 10 meteors per hour, peaking at the end of the first week in August.