Space is beautiful and fascinating, full of unexplored possibilities. While only a small fraction of the universe has been explored and mapped by astronomers, they have achieved certain remarkable feats of observation that have opened up windows into understanding the development of the universe. One of these feats has been the mapping of the Hubble Deep Field (HDF). This compilation of observations by the Hubble Space Telescope has offered astronomers a useful and tantalizing glimpse into deep space since 1995. Following is an overview of the HDF. 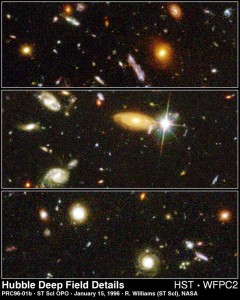 The HDF is a small area of deep space sky that was mapped through more than 100 hours of observation by the Hubble Space Telescope in 1995. The area is located in a section of the Ursa Major constellation, near the big Dipper. It consists of sets of light data that astronomers scientifically compiled into a deep space map. Due to the amount of light collection provided by such lengthy observation, the HDF has revealed the existence of about 3,000 galaxies dating back billions of years in deep space. The result is an area of space that reflects how the universe looked billions of years ago, when the light that we are seeing today first began its journey away from those galaxies.

The Hubble Space Telescope was launched in 1995 with the goal of giving astronomers a look at celestial objects and phenomena that even the most advanced telescopes could not clearly capture from Earth. One of the uses to which the telescope was put, in keeping with this goal, was to map out what is now known as the HDF by collecting light data through a long period of time from a pre-determined area of space. The area of the HDF was chosen because of its relative emptiness. This lack of stars and other celestial objects allowed the telescope to more easily “see” into deep space without the interference of light from numerous nearer celestial objects.

The method used was simple: To collect data from continuous observation of this small area of sky over a long period of time. Eventually, the telescope observed the HDF area for more than 10 days, 100 hours, and 340 exposures. The longer the telescope observed and collected data, the more light it was able to capture. As a result, the telescope was able to highlight even extremely dim and extremely distant objects. Scientists then took this information and pieced it together using specific methods designed to weed out light pollution, such as cosmic rays and residual light from Earth. The resulting picture provided a glimpse of distant galaxies and other celestial objects that had never been seen before.

The HDF is actually a very tiny portion of the nighttime sky. Its small size was intentional, because it allowed astronomers to more thoroughly and completely collect and analyze the data from the Hubble Telescope. The area takes up 1/24 millionth of the total area of the sky and possesses a diameter of about 2.5 arcminutes (a measurement equivalent to one-sixtieth of one degree). Despite its small size, however, the HDF has revealed the existence of thousands of previously unseen galaxies, and provided valuable information regarding the development of the universe.

Objects in the Hubble Deep Field

The HDF literally brought to light celestial objects that had never before been seen. In particular, the field revealed the existence of about 3,000 galaxies that had never been visible to astronomers before. There were two characteristics in particular that made these galaxies stand out: Their age and their distance. These galaxies are billions of light years away. Because of the time it takes light to travel such enormous distances, the light picked up by the Hubble Space Telescope came from these galaxies when the universe was relatively young. As a result, they provide a glimpse into a younger, still-forming universe.

In addition to the galaxies apparent in the HDF, there are a handful of Milky Way stars visible. The number present in the HDF is about 20, a very small number due in part to the fact that that particular area of space was chosen for its emptiness in order to allow the telescope to pick up a maximum number of deep sky objects.

In addition to the galaxies and the near stars, there are about 50 blue point objects visible in the area. These objects are thought to be areas of concentrated light. The cause of these areas is not certain, but is thought to be either aging white dwarf stars, stars just beginning to form, or the exceptionally large and powerful astronomical phenomena known as quasars.

The ability to see so far into space is an exciting achievement in and of itself. However, there are a number of contributions that the HDF has made to the field of astronomy. Its primary significance is its ability to give astronomers a look at the way in which the universe used to be when it first began to be formed. As a result, astronomers have been able to get a better idea of how the universe formed and what the life cycle of galaxies are by observing the objects in the HDF.

In addition, the ability to observe the nature of stars from so long ago has given astronomers a clearer idea of how stars form, while a lack of red giant stars has undermined a previous theory regarding the nature of dark matter. As scientists continue to examine this field of deep sky objects, they continue to enjoy a look at a younger universe that gives them better insight into how our universe of today was formed, and what has caused some of the celestial phenomena we can observe today. As a result, scientists have been able to enjoy fascinating and educational significant astronomical insights, thanks to the mapping of this one tiny area of space.

The HDF-N was the first deep field to be mapped. Thanks to its success, scientists have mapped a number of other deep space fields. The first was located in a more southern quadrant of space and was dutifully named HDF-S (South).

The Hubble Deep Field provides groundbreaking images of the nighttime sky. Despite its small area, it provides glimpses of the ancient universe and far distant objects that continue to give scientists insights into the nature of the universe today.