Stars form inside dense concentrations of interstellar gas and dust called molecular clouds. These clouds contain cool gas and dust (primarily molecular hydrogen) left over from the formation of galaxies. These molecular clouds want to dissipate, much like smoke, however, gravity keeps the cloud pulled together. Gravity continues to pull this gas and dust inward becoming denser and hotter until the hydrogen atoms fuse together to form helium and in turn, forming a star. Astronomers calculate that 5 new stars form in the Milky Way every year. Check out how these stellar nurseries work in this video.

A star in the night sky is a wonder to behold. There are so many mysteries attributed to these celestial objects. But where does they come from? And how are they born?

Since the Big Bang

In the early days of the universe slightly after the Big Bang, there were certain sections where matter was slightly more dense, resulting in atoms beginning to clump together due to to gravitational pull. This clumping of atoms then formed huge clouds of dust and gas which eventually condensed and became extremely dense and hot. 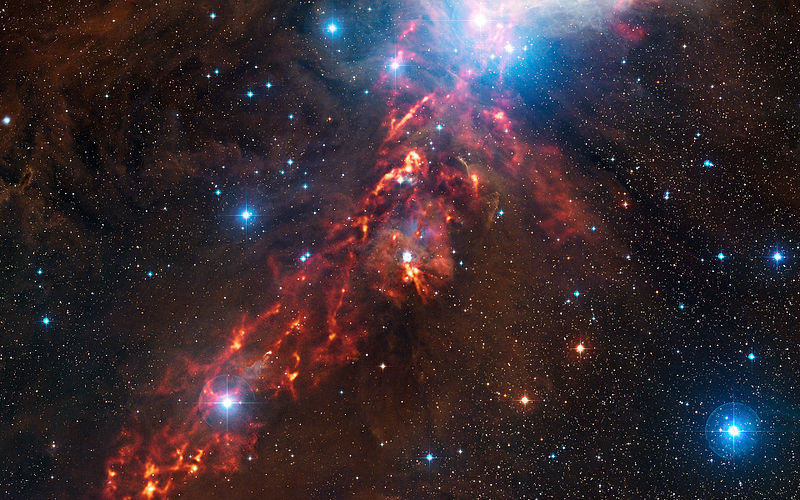 Stars are born within the condensed hot and dense clouds of dust and gas scattered throughout the universe. A popular example among astronomers is the Orion Nebula, situated just below Orion’s belt, this nebula is popular due to its relatively close distance and high visibility, this nebula can be seen through most telescopes. Within these hot, dense clouds, turbulence can cause knots with enough mass to force the gas and dust to collapse under its own gravitational attraction, and once this cloud collapses, the centre begins to heat up. This is known as a protostar, and eventually, this hot core will become a star. Recent models of star formation has predicted that the spinning clouds during this process may break up and form their own stars, this could be the reason why many of the stars in the Milky Way are in pairs or groups of multiple stars.

Upon collapse, the dense, hot core of this newly forming star begins to gather dust and gas, however, not all of this collected material will become part of the star, but can in fact become planets, asteroids, comets, or just remain as cosmic dust. There are some circumstances however, in which the cloud doesn’t collapse at a steady rate. For example, an amateur astronomer by the name of James McNeil discovered a small nebula near Messier 78 in the constellation of Orion. In this newly found nebula was something interesting, it seemed like the brightness varied. With the help of NASA’s Chandra X-ray observatory, an explanation was provided. It seemed that the star’s magnetic field was interacting with the surrounding gas and in turn causing episodic increases in brightness.

If these clouds are to develop into stars, they require a catalyst to trigger the change. In a lot of cases, the catalyst is when a comet charges through the cloud or when the shockwaves from a nearby supernova triggering the particles within the cloud. This trigger helps the particles clump together, marking the beginning of the development of the star. When the particles start to clump together, they create mass and in turn develop a gravitational pull, which then initiates a chain reaction of attracting more particles and gaining mass. When sufficient mass is gained, the newly forming star will become denser and hotter.

Eventually, after millions of years once this “clump” has developed enough, it has become a small dense body known as a protostar which then will continue to grow. It isn’t until the protostar reaches 7 million degrees kelvin that hydrogen atoms are able to fuse together to produce helium in a process known as nuclear fusion. Some objects however, cannot accumulate enough mass to ignite and become brown dwarfs.

This process continues for millions of years. Eventually, the protostar gains enough mass and becomes so dense that it collapses in on itself resulting in a bipolar flow. When this happens, the excess gas surrounding burns out and this marks the birth of a main sequence star. The star will then remain this way until it dies.

The journey of star formation is a long one that begins from just a cloud of dust left over from the big bang. However, there is not just one star that is formed from a cloud. These clouds can span across many light years and contain material thousands or even million times the mass of our Sun. Thus, resulting in the ultimate breeding ground for stars to form.

How long does it take for a star to form?

A star with similar mass to or Sun, takes around 50 million years to develop from the beginning of its collapse to adulthood. This same star will continue to be in this mature phase for 10 billion years. Stars such as red dwarfs however, despite their small nature, are the most abundant stars in the universe and have a lifespan of over ten billion years. On the other side of the scale, the most massive stars, hypergiants, can be more than 100 times more massive than our Sun, with surface temperatures many times more than our resident star. Due to their massive size, they emit many thousand times more energy that our Sun, but like the saying, the light that burns twice as bright burns for half as long, these hypergiants have a lifespan of a mere few million years. Hypergiants were believed to be extremely abundant in the early universe, but are now rare. The Milky Way now contains only a small amount of these stars. 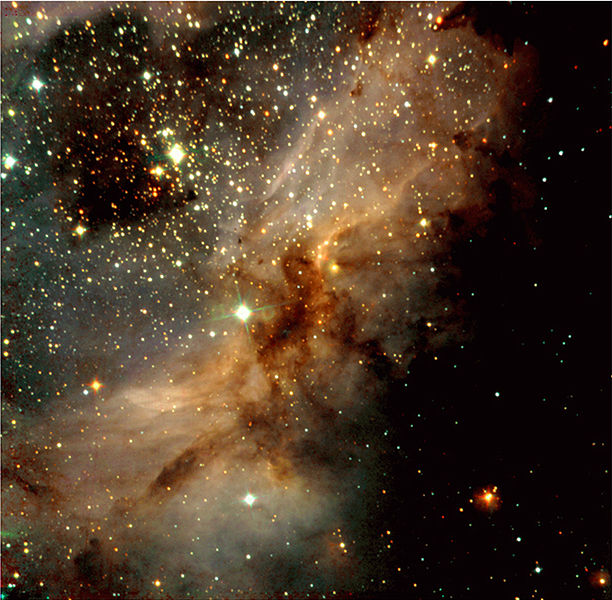 Stellar nurseries are areas that have the perfect conditions for new stars to form. As a result of supernova and stellar winds, heavier elements that formed during a star’s lifetime get blasted into space and the dust produced clump and form these stellar nurseries. Like a never ending cycle, as stars die, they allow for new stars to form, recycling raw materials so they can be reused in the birth of a new star.

How often are stars formed?

One cannot quantify exactly how often stars are formed due to stars varying in size. But one can calculate the standardized rate so that the number can be calculated in solar masses, which is the mass of our Sun. Even in our Milky Way, the rate of star formation, but estimations state that between one and eight stars equal to one solar mass form per year. It may seem unusual that eight stars per year is extremely low in relation to the vast number of stars in our galaxy, so it has been theorized that the rate must have been much higher in the early days of the Milky Way.

Research has shown that there is incredible variation between the rate of star formation in different galaxies throughout the universe. By using the Smithsonian Astrophysical Observatory’s Submllimeter Telescope Array in Hawaii, a galaxy known as GOODS 850-5, that has been calculated to generate more than 4,000 new stars annually. GOODS 850-5 is around 12 billion light-years from Earth.

The early universe would likely have had a much higher rate of star formation than that of today because galaxies would then have been smaller and denser, as well as closer together, with collisions between them more common. It is, in fact, known that bursts of star formation occur after galaxies collide or have close encounters with one another.

As the expansion of the universe continues at an accelerated rate and with galaxies moving further and further apart, it can be theorised that the rate of star formation will progressively slow, but it is not certain how the universe will ultimately end. Although this will not happen until billions of years into the future. So enjoy the night sky while you can.