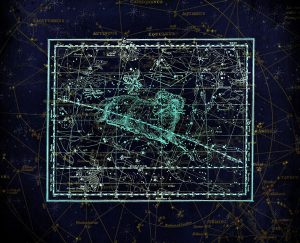 The location of the vernal equinox (one of two points where the ecliptic and celestial equator intersect – specifically the intersection when the Sun crosses the celestial equator from south to north) is also called The First Point of Aries, which is named for the constellation. This is because the vernal equinox was located within Aries over two millennia ago. Hipparchus defined this point in 130 BC. Due to the precession of the equinoxes, in which Earth’s axial tilt slowly changes orientation with regards to the background stars, Pisces is now the First Point of Aries, and Aquarius will be the location of the vernal equinox by approximately 2600 AD. The Sun now appears in Aries from late April through mid-May.

The constellation dates back as far as 1350 to 1000 BC, although Aries was not truly accepted as a constellation until classical times. Aries is the Latin for ram, and the constellation has been depicted as a ram since the time of the Babylonians.

Aries featured in Egyptian astronomy and mythology as well. Linked to the Egyptian god Amon-Ra, Aries was shown as a man with a ram’s head. The constellation was the location of the vernal equinox at the time, so the Egyptians dubbed Aries “Indicator of the Reborn Sun”.

In ancient Greek mythology, Aries is the ram which rescues the son and daughter of King Athamas, when his jealous second wife tries to kill them. Although the daughter, Helle, dies during the rescue, the son Phrixus lives and sacrifices the ram to Zeus. The fleece is hung in a sacred place and becomes known as the Golden Fleece.

Though Medieval Muslim astronomers traditionally depicted Aries as a ram, some also showed the constellation as a four legged animal with antlers rather than horns. Persian astronomer Al-Sufi described Aries as a ram looking back as it ran.

There are three prominent stars in Aries often used for navigation, and which form an asterism. German celestial cartographer Johann Bayer listed them as Alpha, Beta, and Gamma Arietis. 41 Arietis is a fourth star within the asterism, though being above the fourth magnitude, it is not as prominent as the others.

There are several other double stars housed in the constellation.

A number of other stars in Aries are visible to the naked eye, including:

Paired with a good telescope, Aries has a number of deep sky gems worth viewing, and a view which are just outside the amateur’s reach as well.

Meteor showers are usually a bright and beautiful treat of the night sky. Aries is home to one of the strongest day time showers – The daytime Arietid meteor shower.

The zodiac is a rich region of the night sky, and Aries constellation is certainly worth exploring on a dark and clear night, telescope at hand.