The Celestron AstroMaster 114EQ combines affordability and simplicity, power and performance, into a single telescope. Easy to set up and use, as well as being and inexpensive telescope, it makes a good choice for beginning star gazers. At the same time, its optical capabilities enable even experienced star gazers to enjoy discovering their favorite celestial objects all over again and gives viewers images even of the deep sky objects. 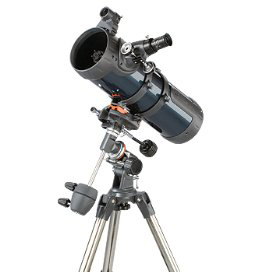 One of the most outstanding characteristics of the Celestron AstroMaster is its simplicity of setup and use. The telescope is a bit more complex than other beginner telescopes, but this complexity does not carry over into how the scope is set up. Consumers report almost unanimously that the AstroMaster is very easy and quick to set up, even by consumers who have never before owned a telescope. Part of the reason for this ease of set up is the clear set of instructions that accompany the telescope. In addition, these instructions make the AstroMaster 114EQ relatively easy to use, even by beginners. The most difficult feature of the telescope to use is the red dot finder, which a few consumers have reported having trouble using. In general, they reported that it either took a significantly long time to locate the object they were looking for or that they were unable to use the finder successfully at all.


In addition to its simplicity, the AstroMaster’s performance sets it apart from other telescopes in the same price range. The scope comes with two eyepieces that offer two different magnifications. The 20mm eyepiece provides 50x magnification, while the 10mm offers an effective focusing tool with 100x magnification. These magnifications exceed those on other, similarly priced, telescopes and thereby offer viewers more detailed views of the nighttime sky than consumers might otherwise be able to get with a less powerful telescope. In addition to being able to obtain views of the moon’s surface or Saturn’s rings, consumers can locate deep sky objects as well. In addition, consumers can choose to use the scope either to view objects on earth or objects in the sky, lending the telescope variety and flexibility that make it appealing to a wider range of consumers.

The AstroMaster’s value to the consumer is enhanced by the inclusion of Celestron’s TheSkyX—First Light Edition software. This software includes a database of 10,000 objects which the consumer can use to educate themselves on the nighttime sky, as well as 75 images.

In general, the AstroMaster boasts high quality construction, with many of its parts being made of durable steel or aluminum. In particular, the mount and tripod receive praise from consumers for their quality of construction and their sturdiness. This sturdiness makes it easy to place the telescope wherever the consumer wishes with the confidence that it will remain steady and upright. This quality is backed up by Celestron’s two-year warranty against defects and damage, assuring the consumer that the telescope will last for years.

The Celestron AstroMaster 114EQ provides an appealing combination of affordability and performance. The purchase price is competitive with other entry-level telescopes. However, the variety and strength of the available magnification, the quality of the telescope, and the level of detail which the AstroMaster can provide makes it appealing even to more experienced stargazers. As a result, the AstroMaster is a good choice for anyone who wants to either delve into the nighttime sky for the first time or who wants a telescope they can use to further a stargazing hobby they have already begun to develop.