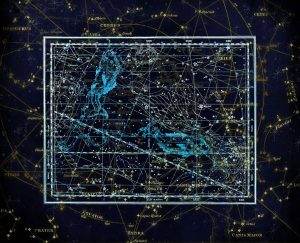 The vernal equinox is currently located in the constellation Pisces, though it’s slowly moving towards Aquarius. The vernal equinox is one of two dates that mark roughly equal lengths of day and night, and also marks the beginning of a new year in a few notable cultures. Therefore, contrary to what astrology says, Pisces could be considered the first constellation of the zodiac, not the last.

How to Locate Pisces

Pisces can be found in a region of the sky nicknamed the Sea, alongside other water-related constellations including Aquarius, Capricornus, Cetus, Delphinus, Eridanus, Hydra and Piscis Austrinus. Pisces is found in-between Aries, lying east of the constellation, and Aquarius.

The stars in Pisces are quite faint, and its form – the fish – is abstract. You may have some difficulty finding it if you are unsure of what to look for, but there is an asterism inside this constellation that will make it easier to spot.

The Circlet lies south of Pegasus. This ring of stars represents the western fish’s head. Since Pisces is so dim, you will need a dark sky to view it properly, but in little or no light pollution, the Circlet forms a distinct shape that is hard to miss.

You can also navigate to Pisces by using the Great Square of Pegasus or Andromeda as pointers. Pisces lies south of both of them.

The best time to view Pisces, regardless of the hemisphere that you’re in, is in November or December. It will reach its highest point in the sky at around 10 pm.

Pisces’ origin as a constellation can be traced to the Babylonians, who recognized it as two fish connected and held together by rope. Its myth, however, is said to belong to the Romans.

It is associated with Venus and Cupid. According to folklore, the couple tied themselves together with a chord before becoming fish, so they could hide away from a great monster, Typhon. In Greek mythology, the story is almost exactly similar, with only a few differing details. Here, it is Aphrodite and her son Eros who feature, but there are variations in where the legend stems from. In one version, just as in Roman mythology, the two transform into fish to hide away from Typhon. In another, they call to water nymphs for help and are rescued by two fish who carry them to safety.

Pisces is also associated with Christianity and Jesus. Though Christianity itself has no correlations to the constellation, many people believe that the two are connected. Reasons for this is that Jesus is said to have lived in the age of Pisces. He also feeds 5,000 people with only five loaves of bread and two fish – one of his miracles noted in the Bible.

Pisces is one of the constellations of the zodiac catalogued by 2nd century Greek astronomer Ptolemy.

Stars in the Constellation Pisces

Compared to other constellations in the zodiac, Pisces may be the most difficult to view with the naked eye, due mostly to its lack of bright stars. Its brightest star is magnitude 3.62. Still, it is a great constellation to observe with equipment. There are ten stars with known planets inside Pisces.

Though most of the stars in Pisces are dim, there is a variety of fascinating deep sky objects found within it. It has an abundance of galaxies that are a treat if you have a telescope. There is one Messier Object to observe too.

M74 also stands out for the supernovae it houses: two have been found inside galaxy thus far. The first was a rare hypernovae. The second was a very strong x-ray source which suggests it is likely a black hole. M74 is one of the faintest Messier Objects and is difficult for amateur astronomers to locate or observe. The French astronomer Pierre Méchain discovered it, and he informed Charles Messier about his discovery to have it included in the famous catalogue.

Pisces may not be the most distinguishable constellation, but it has a long and rich history both in astronomy and in many cultures. It certainly offers a gem or two to look at on a clear, dark night.