The NexStar 130SLT is a unique reflector telescope from Celestron. The reflector technology uses mirrors to obtain the maximum amount of light possible and therefore to produce images of remarkable clarity, even when located deep in space. In addition, the scope’s relatively large aperture, easy set up and ease of use make it a good choice for those for whom the stargazing experience is more important and enjoyable than the process of setting up and handling the scope. The result is a reliable, appealing telescope for a variety of stargazing scenarios. 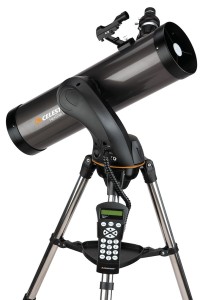 The Celestron NexStar 130SLT is a Newtonian reflector telescope designed to maximize celestial views. The scope does so by using its reflector method to bring about clear views of details such as the Hercules globular cluster, stars, or the Great Orion Nebula. These views are made possible by the telescope’s ability to use mirrors to collect and distribute the light that creates the detailed views of far away objects. In addition, the telescope’s 130mm aperture allows in 30 percent more light that the previous SLT version with a 114mm aperture. The resulting beautiful views receive praise from consumers for their clarity and appeal.

In addition, the 130SLT is quick to set up. For instance, its single fork arm mount and pre-assembled tripod allow the user to set up the telescope quickly, even without having had a great deal of prior experience with telescopes. Its computerized Altazimuth mount and Star Pointer technology also make it easy to find and focus on nighttime objects. The scope’s SkyAlign technology also makes the telescope easier to use, especially by beginners, by automatically aligning itself when focused on three objects in the sky. The only downsides to the telescope’s use and design is the need to collimate occasionally, as well as the need to input the date and time every time the telescope is used, since it does not save this information.

In addition to its appealing features and ease of use, the 130SLT comes with Celestron’s backing. For instance, it comes with a two-year warranty on parts. In addition, it comes with the company’s good customer support backing it up. Consumers report having generally positive experiences dealing with the customer support, allowing them to easily resolve any issues they face with their Celestron telescopes. Because the telescope can capture good views of distant objects without costing excessive amounts of money, the scope serves as a good choice for anyone desiring to enjoy the nighttime sky without spending more than a few hundred dollars. In addition, the scope’s ease of use make it appealing to anyone looking for any easily portable scope as they explore the sky.