The Celestron PowerSeeker 70AZ is an extremely low cost telescope designed to provide families, amateurs, and even children an appealing and affordable glimpse of the nighttime sky. Despite being a budget telescope and costing less than $100, this scope offers the consumer a variety of eyepieces and magnifications, detailed views of certain celestial objects, and a simplicity of setup and use that makes it a good choice for anyone who has never used a telescope before. The result is a telescope that offers everything the beginner needs to enjoy the world of stargazing. 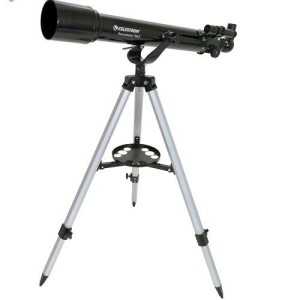 The Celestron PowerSeeker 70AZ is designed to meet the needs of beginner astronomers, especially families and children who desire a fun way to explore the stars without the financial and technological commitments that larger, more advanced, telescopes require. To this end, the PowerSeeker is priced at less than $100, and can be found for closer to $60 or $80. The result is that the scope makes an inexpensive investment for anyone who wants to decide whether stargazing is a hobby they wish to pursue, and for children who may or may not sustain interest in the stars over time.

The PowerSeeker’s usefulness as a beginner scope is amplified by its basic, but quality, magnification and viewing features. For instance, it provides a 70mm aperture, a number of eyepieces, and a Barlow 3x, that triples the strength of the eyepieces and therefore improves the telescope’s viewing ability. The Powerseeker’s technology allows it to be used to look at objects on earth around the scope, such as trees and landmarks, as well as celestial objects, such as the moon and planets. The magnification of the telescope is such that viewers can see the rings on Saturn or the surface of the moon. The only downside to the technological offerings of the PowerSeeker is that fact that it does not automatically track celestial objects under observation. As a result, the objects quickly disappear from sight unless the consumer tracks them manually.

Another appealing feature of the Celestron PowerSeeker is the SkyX Planetarium Software that comes with the telescope. This software, which can be downloaded onto a computer, allows the consumer to find any one of 10,000 celestial objects. As a result, the software adds a valuable educational component to the telescope’s package.

The PowerSeeker’s design, in addition to its technology, make it a desirable choice for beginners. Intended to be easy to set up and use, this scope does not require any tools for assembly. Without the instruction manual, the scope can be hard to put together correctly. However, with the aid of the instruction manual, consumers report being able to quickly and painlessly get their scope ready to go. The scope can even be aligned in the daytime by using outdoor objects, to make the job even easier. In addition the altazimuth mount simplifies the setup process. The only downside to the scope’s design is the fact that many of the pieces are made of plastic instead of more durable stainless steel or aluminum. A two-year warranty, however, reassures the consumer that the PowerSeeker is a safe investment that will last for years.

The Celestron PowerSeeker stands out from other beginner telescopes because of its extremely affordable price that puts it within reach of even the most occasional nighttime observer. In addition, its ease of setup and use make it a good choice for those who do not wish to spend the time required to operate more advanced scopes, while its good basic features, magnification, and accessories make it a good value and a reliable choice for beginner who want a basic telescope that will last them for years.