The NexStar 127SLT is one of Celestron’s line of telescopes designed to ease beginners into the world of stargazing. Characterized by a 127mm aperture and sporting Celestron’s proven SkyAlign technology, this telescope offers consumers good views. In addition, the telescope’s single fork arm and simple design make it easy to set up and use. As a result, it serves as an appealing choice for anyone looking for a basic, entry level way to enjoy the nighttime sky. 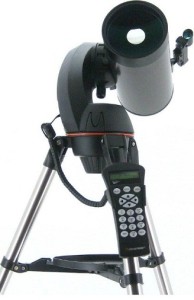 The Celestron NexStar 127SLT is an entry-level telescope designed for anyone looking for a reliable telescope with which to begin enjoying the nighttime sky. The 127SLT shares many characteristics in common with the company’s other SLT models. For instance, it is a Maksutov-Cassegrain, computerized scope that possesses technology to make it fast to set up and easy to use. The telescope is made particularly easy to set up and use by its use of a single fork arm that can be set up and taken down without the use of tools. In addition, its SkyAlign technology makes it capable of aligning itself when aimed at three bright objects in the nighttime sky. Its Star Pointer program allows the scope to accurately find and orient itself to chosen objects in the sky, making it easier for the user to enjoy the views for which they are looking. An accompanying database gives the user access to thousands of nighttime objects.

Besides its ease of set up and use, the NexStar 127SLT possesses technology that gives the user appealing and clear views. For instance, the 127mm aperture and 60x magnification allow the user to see details such as the craters on the moon, Saturn’s rings, and the polar caps on Mars. In general, it is these views for which the 127SLT receives the best reviews from consumers. While the views do not match those of more advanced telescopes designed for more advanced observers, its views are generally considered excellent for such a small entry level scope. The only downside to the 127SLT is a tendency for the parts of the telescope, such as the mount to suffer irritating levels of vibration and/or to break relatively easily and require replacement.